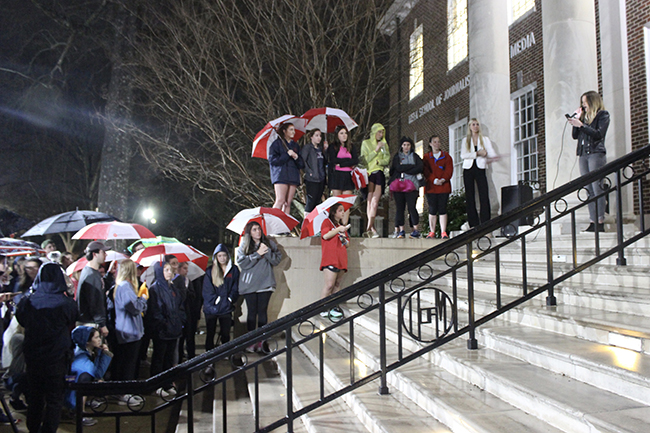 Despite the rain Tuesday night, students and faculty gathered to show support for the survivors of the Marjory Stoneman Douglas High School shooting in an event deemed the ‘Walk of Champions.’

Among those present at the walk was Alexa Johnson, a senior integrated marketing communications major, who graduated from MSD in 2014.

Johnson organized the walk to bring awareness of the recent event that has affected the members of the Parkland community. She chose Feb. 27 to host the walk; one day before the students of MSDHS came back to school since the attack.

“The goal of this walk was to bring my second home of Oxford, the community and the students of Ole Miss together to support my first home of Parkland, the community, the victims and all those affected,” Johnson said. “We wanted to show them that they are not alone even though they are hundreds of miles away.”

When planning the event, Johnson asked her friend and sorority sister Alexandra Morris, a senior journalism major, to co-organize it. Morris, a member of Ole Miss’ student news program, NewsWatch, helped spread information about the walk by contacting former instructors, sending out social media messages and previewing the event on the program’s daily broadcast.

“It was an awesome turnout especially since it was raining,” Morris said. “I think it means more that people still showed up in the rain to show their love and support for MSD.”

In order to host the event on campus, Johnson needed a group to act as a sponsor. Will Norton, Jr., Dean of The Meek School of Journalism and New Media, agreed to co-sponsor the event.

“We always try to honor our students,” Norton said. “This event will honor those who died last week and support those who are trying to get their lives back together because they survived.”

The walk began at 7 p.m. on the steps of Farley Hall. After a speech by Johnson, participants walked under the Walk of Champions arch, through the Grove, into the circle and finished at the Lyceum. Participants ended the event by yelling “we stand with you.”

The event was filmed by WTVA, members of NewsWatch and Ole Miss photojournalism students. Footage and photos will be collected and sent to Johnson’s former teachers in Florida to show support and love for the survivors. Johnson also hopes to raise money for the memorial being built to honor the victims of the shooting.

“I wanted to do this to show the students and faculty on their first day back that Ole Miss and Oxford supports them and thinks they are champions for being able to walk through those doors where the massacre happened and pick up the textbooks where they left off before everything happened,” Johnson said.