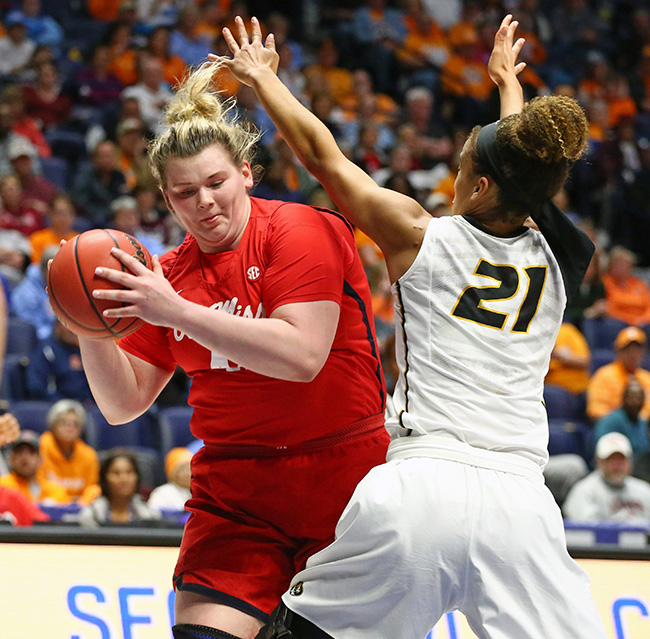 Ole Miss’ Shelby Gibson (42) is defended by Missouri in the SEC Tournament on March 1, 2018 in Nashville, Tenn. at Bridgestone Arena. (Petre Thomas)

There was not enough magic to keep Ole Miss in Nashville for another day.

A day after becoming only the second 14 seed to advance to the second round of the SEC Women’s Basketball Tournament, the Rebels lost 59-50 to 6 seed Missouri on Thursday night at Bridgestone Arena to end their season.

The Tigers will play 3 seed Georgia on Friday in the quarterfinal round at 8:30 p.m.

Ole Miss (12-19) never led but got to within two points at halftime thanks to an 8-0 run before Missouri outscored them 31-24 in the second half to hold on.

Madinah Muhammad scored a game-high 20 points before fouling out at the end of the game. Alissa Alston scored 10 to be the only other Rebel to score in double figures. Chyna Nixon and Shelby Gibson each scored seven points.

The Rebel defense continued its solid play from Wednesday, causing 24 Missouri turnovers, but the Rebel offense struggled, scoring only 14 points off them. Ole Miss shot 28 percent (18 of 64) from the field.

During their previous meeting in Oxford during the regular season, Missouri’s Sophie Cunningham scored 20 points and pulled down 10 rebounds. On Thursday, she was held in check with 11 points and four rebounds.