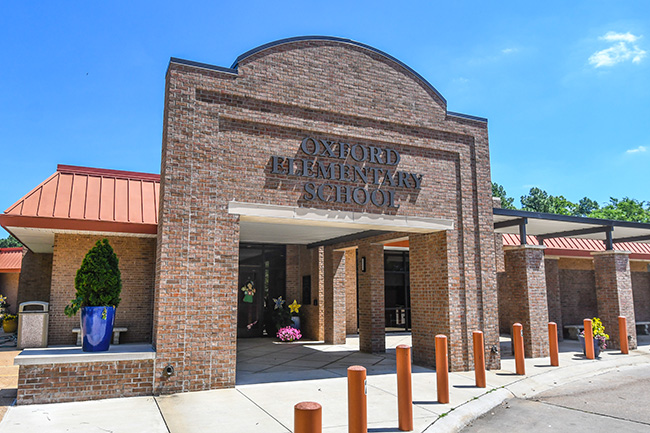 Watching Oxford Elementary teacher Sylvia Tropp pushing a wheeled container that looks like a big trash can, some of the students think she may have two jobs at the school.

“A first-grader I know outside of school told her grandmother, a friend of mine, that ‘Mrs. Tropp has two jobs at school – teacher and trash collector,’” Tropp said recently. “I’m sure she’s not the only student who thinks I’m collecting garbage.”

The wheeled containers are actually for recyclables. Tropp, the second-grade Insight teacher at OES, also runs the school’s recycling program.

For her efforts over the last two school years, the Mississippi Recycling Coalition recently awarded Tropp a $500 grant to help grow the program.

The recycling program started up at OES about six years ago by teacher Leslie Orrell. The program continued with teacher Jenny Mitchell until Tropp took over last school year.

During the first year she ran the program, Tropp would select a few boys from one of her classes to go around the school and empty recycling bins into the wheeled containers. Teachers can have two bins – one to collect paper and one for plastic and aluminum cans. The recyclables are then picked up on Mondays by Oxford Environmental Services.

At the start of the current school year, Tropp wanted to engage more students in the recycling program.

“Each of my four classes developed a different project to promote recycling at Oxford Elementary,” she said. “Two classes planned skits and performed for the other classes in their hall. One class made posters to put up around the building reminding everyone to recycle and what can be recycled.  The other class created a slide show which was not only shared with the classes in their hall but sent to all teachers in the building to share with their classes.”

She’s also engaged the help of more of her students, as well as other students in the school who show an interest in learning more about recycling.

“Many students stop me in the hall to ask if they can help,” she said. “It is quite gratifying to see the enthusiasm among the students at OE.”

Tropp said she has seen an increase in participation from teachers and students this year.

“Each month I have a drawing of names of those who had recyclables in their bins for a chance to win a small prize for participating,” she said. “I also award ‘Bolt Bucks’ for participation, which is a type of positive reinforcement program we use at OE.”

Tropp plans to use the $500 to purchase additional wheeled containers, more bins, sterile gloves for handling the recycling and poster board for new posters for next year’s classes to use.

Many of Tropp’s students have told her they have been recycling more at home since they started learning about recycling at OE, Tropp said.

“I feel recycling is important and worth the effort and hours it takes,” she said. “It’s good to model recycling to the students and good for them to be engaged in recycling.”