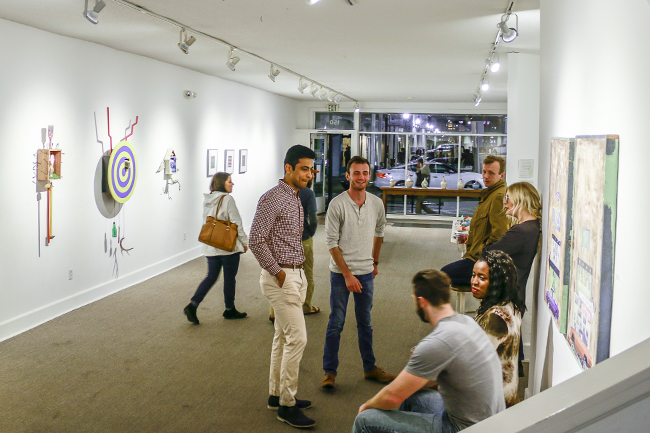 Patrons attend the Oxford Art Crawl at the Southside Gallery on the Square in Oxford, Miss. on Tuesday, February 27, 2018. Vacation booking site Expedia named Oxford one of the “Most Artistic Towns in America” for 2018. (Chi Kalu, Oxford Eagle)

This week, vacation booking site Expedia named Oxford one of the “Most Artistic Towns in America” for 2018.

The list placed Oxford in the same league as several major art cities, including Cambridge, Mass., Ann Arbor, Mich. and Savannah, Ga. In a statement to the EAGLE, Lily Rogers, author of the article, said the support Oxford has for its artists is what made it stand out from others.

“In compiling this year’s list, we really wanted to feature places that have art in their roots and continue to encourage thriving creative communities,” Rogers said. “With supportive works like that of the Yoknapatawpha Arts Council, the history of music and literature and the number of working artists and events in the city, we couldn’t ignore the merits of this vibrant art scene.”

Rogers’ article encapsulates various parts of the LOU community, mentioning the Gertrude C. Ford Center for the Performing Arts at the Ole Miss, Southside Gallery on the Square and even Oxford Conference for the Book.

Also at the forefront is Yoknapatawpha Arts Council, with its programs aimed at nurturing artists and educating the community. Two programs in particular, the monthly Oxford Art Crawl and the Art Incubator, are mentioned. Wayne Andrews, executive director of YAC, said the inclusion of these programs is especially important.

“We are excited that the arts incubator was included as one of the reasons why our town is distinctive because it puts the arts at the center of how we view our community,” he said. “We’re consistently building programs to foster the arts and a sense of community, and it’s nice to have that recognized on a national scale.”

This is not the first time the Oxford art community has been featured on a national or regional list, however. Most recently, in November 2017, the Yokna Sculpture Trail was featured in the Atlanta Journal-Constitution as part of its article, “6 amazing outdoor sculpture destinations in the South.”

The Double Decker Arts Festival was also mentioned as an event that “electrifies the town with two days of live music, art vendors, food and community.” Past performers have included Drive-By Truckers, the Avett Brothers and Mississippi’s own R.L. Burnside. This year, a partnership with Ole Miss will bring indie rock group Cold War Kids to headline the festivities, which will be held on April 27 and 28.

The arts community isn’t the only aspect of Oxford that is expected to benefit from this title. In the  2017 fiscal year, tourism brought in $4 million to the local economy, as reported previously in the EAGLE. Visit Oxford is the 2017 state Tourism Office of the Year, and Joe Scott, Visitor Services Coordinator, said organizations like YAC have made Oxford the “capital of the arts” for Mississippi.

“Seeing Oxford being given this distinction makes us so very proud of our town,” Scott said. “At Visit Oxford, we work tirelessly to promote our city to the world. We’re so happy to see Expedia recognize our arts community like this.”