Lafayette’s Buford puts team on her back in final minutes, sends ‘Dores to 5A semis 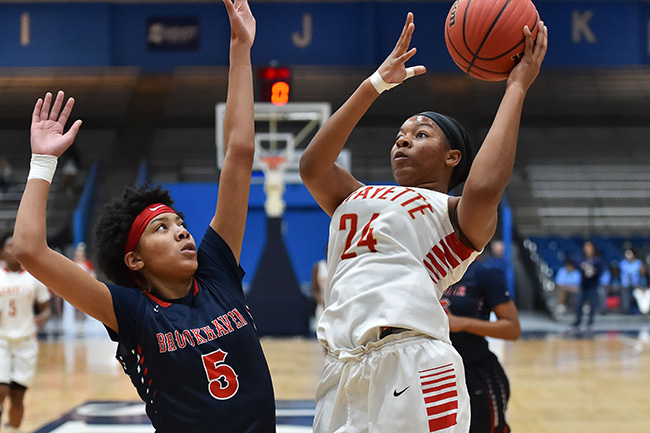 Lafayette's Mariah Holland (24) against Brookhaven during the MHSAA Girls 5A Tournament held at Jackson State in Jackson, Miss. on Friday, March 2, 2018. .(Photo/Bob Smith)

JACKSON — Shayne Linzy wanted to take Azariah Buford out of the game. She wouldn’t let him.

Because of that, Lafayette is heading to the Class 5A semifinals.

The Commodores defeated Brookhaven 42-37 in the quarterfinal round inside the Williams Assembly Center on the campus of Jackson State University Friday morning.

It was Buford’s first game back after being involved in a car wreck two weeks ago that kept her out of action with a dislocated hip and a staple in her head.

“It took the focus off my hip,” Buford said of her second half. “I just played ball. I got better (as the minutes progressed) and it took my mind off my hip.”

Buford finished with a game-high 16 points, 6 rebounds and 4 assists in 27 minutes of playing time. She did not start and Linzy was monitoring her the entire time, wanting to sit her in the waning minutes of the game.

“I tried to pull her off and she looked at me and said ‘no,’” Linzy said. “It’s her first game in two weeks and she was carrying a lot with all the things that happened and she came out and she sacrificed that kind of stuff for her teammates. …she’s that x-factor. She can do things a lot of people on other teams don’t know how to stop.”

The game was a defensive slugfest with the score knotted at 31-all heading into the final quarter. The score was also tied at the end of the first quarter at 9-all, and again at halftime at 21-21.

But in the fourth quarter, Buford put the team on her back and almost single-handedly defeated Brookhaven.

Another key play came from Mariah Holland who hit a put-back after Buford missed a free-throw to put Lafayette up by four with 50 seconds left in the game.

“That was huge,” Linzy said of Holland’s play. “We weren’t nearly rebounding the ball as well as we should have on the offensive end. We were taking a shot and then we were done. That one right there was huge and part of it was maybe (Brookhaven) was expecting us to go rebound.”

Lafayette finished the game with 38 boards to Brookhaven’s 27.

Holland scored 13 points and pulled down 10 rebounds as the only other Commodore in double-figures. Xhiir Burgess added 6 points and Kimaya Dixon scored 4.

Brookaven’s Tamia Stallings led the Lady Panthers (24-7) with 12 points, Silentianna Collins was held to one below her season average with 9.

The Lady Commodores advance to play Hattiesburg, who defeated the defending 5A champions Neshoba Central, at the Mississippi Coliseum on Tuesday at 4 p.m.