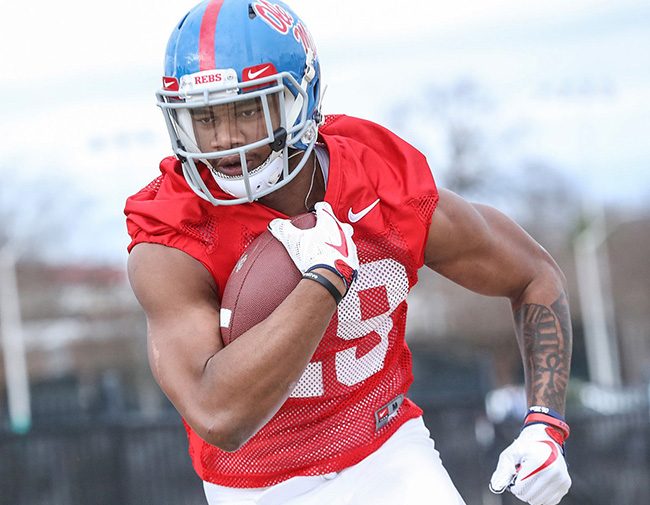 Ole Miss' Armani Linton (29) runs through a drill during football practice on Tuesday, February 27, 2018 in Oxford, Miss. Linton has been moved from defensive back to running back.

Buried on Ole Miss’ depth chart at safety, Linton approached running backs coach Derrick Nix last fall about making a move he felt would benefit both himself and the team. That led to work on the scout-team offense, where the Walnut native stood in as quarterback Jalen Hurts during the Rebels’ preparation for Alabama and ran the plays of whichever team the Rebels were playing any given week.

“(The coaches) started looking at the film like they do every day, and it looked like I was making plays,” Linton said. “They talked to me about it, and I started working reps after practice just getting the feel for it. After the season, he came to me about it, talked about it, and they said, ‘Why not give it a try?’”

Now Linton is going through his third spring with the Rebels as a running back, joining a new-look backfield where “every one of them are fighting for the starting job” with Jordan Wilkins no longer around, Nix said. Linton towers over the rest of the competition with a 6-foot-2, 218-pound frame, something that appealed to coaches while watching Linton operate on the scout team.

“Just that size-speed ratio and a guy that just had a knack for some natural running abilities,” Nix said. “Setting up blocks, making people miss, catching the football and having a big enough body to help us in pass protection as well.”

It’s not a completely new position for Linton, who played running back in high school before moving to safety full-time after signing with Ole Miss in 2015. Appearing mostly on special teams, he had just six tackles in 19 games the last two seasons.

There’s footwork and assignments to learn all over again while also trying to keep up with the frenetic pace at which the Rebels’ spread offense operates. It’s a process, but Linton said it’s slowly coming along.

“Overall I feel like I’m grasping it pretty well,” Linton said. “I’m not trying to let my mind get too ahead of things. I’m just kind of letting it come to me. Not rushing anything and being patient while I’m back there. That’s the main thing.”

Linton figures to get a long look this spring as one of the few healthy options in the backfield. Juniors Eric Swinney and D’Vaughn Pennamon are the most experienced backs left on the roster, but Pennamon (knee surgery) and senior D.K. Buford (shoulder) will miss all of spring with injuries. Junior college transfer Scottie Phillips is also working his way back from a minor injury and will be limited, leaving true freshman Isaiah Woullard as the only other scholarship back that’s 100 percent.

It’s a move that could end up benefiting all parties involved.

“He just wanted an opportunity to help this team and contribute more,” Nix said. “He’s done a great job with special teams already, and it gives him an opportunity for him to help us at running back by moving up the ladder and being at a more natural position. Let’s give him a shot and see what he can do.”

Said Linton, “It’s a change, but overall, it’s for the better.”