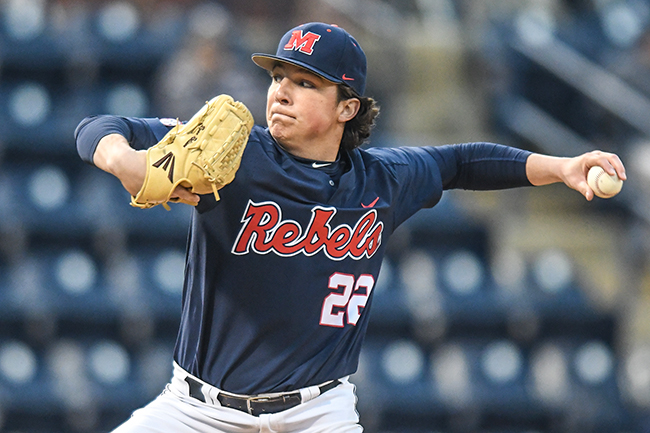 Ole Miss’ Ryan Rolison pitches against Winthrop in Oxford, Miss. on Friday, February 16, 2018. Rolison has a 2-0 record, an ERA of 0.90, and is holding opposing batters to a batting average of .118. (Bruce Newman, Oxford Eagle via AP)

It hasn’t always been easy, but Ole Miss has stayed unbeaten in the confines of Oxford-University Stadium.

Now the ninth-ranked Rebels hit the road for their stiffest test of the young season.

Ole Miss will take its first 8-0 start since 2008 across the country to Long Beach State this weekend for a series starting Friday at 8 p.m. CT. Saturday’s middle game will begin at 4 p.m. CT before the teams wrap up the series Sunday with a 1:30 p.m. CT first pitch from Blair Field.

Ole Miss’ latest win came Tuesday in walk-off fashion against Murray State as the Rebels rallied from a pair of deficits to get it. Ole Miss has also sandwiched sweeps of Winthrop and Tulane around a midweek victory over Memphis — teams that have a combined 11-14 record.

The margin of victory has fluctuated. Three of Ole Miss victories have come by at least four runs while Tuesday’s win was the Rebels’ fourth by two runs or fewer.

“Coach (Mike) Bianco says you’ve got to win them all,” sophomore outfielder Thomas Dillard said. “You don’t want them all to be cakewalks. You want to be challenged along the way. It’s just going to make us a better team in the end.”

The level of competition will go up a notch against Long Beach State (3-6) despite what the Dirtbags’ record may insinuate through the season’s first two weeks.

The defending Big West Conference champion and a super regional participant last season, Long Beach State has already challenged itself against three Power Five teams. The Dirtbags followed up a midweek loss to Southern Cal with a trip to No. 7 TCU last weekend, dropping two of three to the Horned Frogs. They most recently split a midweek series with Arizona State, avenging a 1-0 loss Tuesday with a 16-4 rout of the Sun Devils on Wednesday.

“Just an unbelievably difficult schedule, so you can’t really go by their record,” Bianco said. “Long Beach, those that follow college baseball know that they’re a perennial powerhouse on the West Coast and a team that’s been to Omaha a ton of times and won the Big West Conference last year.”

The Rebels’ arms have gotten plenty of support from an offense that’s scored at least seven runs five times. Ole Miss’ .306 average is in the middle of the pack in the SEC with leadoff man Grae Kessinger (team-high .452), Dillard (.385) and catcher Cooper Johnson (.357) off to strong starts after each hitting under .200 last season as freshmen.

Long Beach State will try to combat that with arguably the best collection of arms Ole Miss has seen to this point led by right-hander Zak Baayoun (2-0, 1.26 ERA), who has struck out 19 in his first 14 ⅓ innings while limiting opponents to a .200 average.

“I think it’s going to be a big test for us on the road,” Bianco said.

Ole Miss falls to Missouri in second round of…