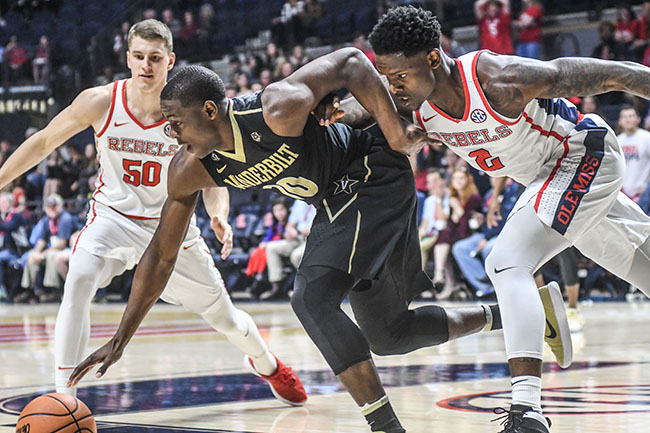 The nightmare for Ole Miss is almost over.

The Rebels closed out their worst regular season in more than two decades with an 82-69 loss to Vanderbilt on Saturday at The Pavilion. Bruce Stevens led four Ole Miss players in double figures with 17 points, but it wasn’t nearly enough to keep Ole Miss from avoiding a last-place finish in the SEC.

Vanderbilt (12-19, 6-12 SEC) presented Ole Miss (12-19, 5-13) with a chance to avoid that distinction as the teams began the day tied at the bottom of the SEC standings. Terence Davis’ layup with 11:32 left trimmed Vanderbilt’s lead to 59-58, but the Commodores responded with a 16-3 punch the Rebels never recovered from on the way to their third straight loss under Tony Madlock, who’s coached the last four games after Andy Kennedy resigned Feb. 18 amid the Rebels’ first losing season since the 2005-06 campaign.

“One of those nights man,” Madlock said. “Defensively, we couldn’t get stops.”

Ole Miss’ women’s team also finished last in the league, making this the first year the same school has turned in the worst men’s and women’s league records since South Carolina in 1999. Both programs are in the market for a new coach after Ole Miss mutually parted ways with women’s coach Matt Insell on Friday.

“No one wants to be last,” said Davis, who finished with 15 points on 6 of 10 shooting. “We definitely talked about it before the game.”

Ole Miss, which has lost 10 of its last 11 games, has at least one game left in next week’s SEC Tournament. The Rebels will take on No. 11 seed South Carolina in the first round Wednesday at 8:30 p.m. at the Scottrade Center in St. Louis.

Should the Rebels’ stay in Missouri last just one day, Ole Miss will match its fewest number of wins since the 1995-96 season. Ole Miss’ five conference wins are the fewest since winning four during that 2005-06 season.

“The second half of this game just isn’t what we wanted it to be, but the guys have been motivated. They’ve played hard,” Madlock said. “I’m proud of the guys. It’s just a matter now of trying to reset and get ready to go to St. Louis.”

There’s little evidence that a miracle run is coming next week given the defensive issues that have plagued Ole Miss all season. The Rebels entered the day last in the SEC in points allowed, next to last in 3-point field-goal percentage defense and 12th in field-goal percentage defense, and Vanderbilt, behind a game-high 19 points from forward Jeff Roberson, took advantage.

The Commodores answered Davis’ layup with back-to-back baskets and scored on their next four possessions to take a double-digit lead that stretched to as many as 15. Vanderbilt lit it up from deep, connecting on 12 3-pointers with Riley LaChance (3 of 8), Roberson (2 of 5), Joe Toye (2-2) and Clevon Brown (2 of 3) combining for nine of them.

Vanderbilt, which also got 17 points from Saben Lee and 14 from Maxwell Evans, shot 52.7 percent from the field and 80 percent (12 of 15) from the free-throw line. Ole Miss made 42.6 percent of its shots and outscored the Commodores 19-5 in second-chance points but once again failed to string together the necessary stops to stay close down the stretch.

“We just didn’t guard,” Madlock said. “And then of course when you’re not making shots, then it kind of affects the defense and that shouldn’t happen. It’s kind of been the story all year.”