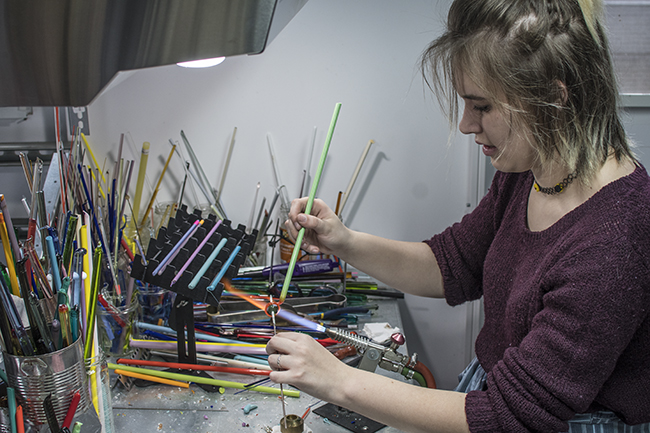 King, 21, learned how to make the beads while studying abroad when she was in high school.

“My mom is Italian, so I did a year abroad there my junior year of high school. There’s an island there called Murano, and that’s where they do all the glass,” she said. “It seemed really cool and my parents have always been super supportive of my art, so they paid for classes and that was pretty much it.”

Murano glass involves a technique that dates back to the Roman Empire, and has a historically secretive history. In 1291 and 1295, the Roman emperor ordered all glass-making furnaces to be moved to the Venetian island of Murano and subsequently forbade the glassmakers from leaving the island. The secrets of molding glass were hidden away for centuries, but King says today, more artisans are starting to open up to outsiders.

To create her pieces, King melts tubes of glass into shape over an open flame, molding them on a mandrel, or metal rod, to keep their form. After perfecting the main shape of each bead, usually circular or cylindrical, she adds designs like polka dots or swirls in other colors. Once the design is complete, she places the bead in a kiln, where it cooks, making the bead more resistant to breaks. Once a set of beads is complete, she puts everything together to create a finished piece of jewelry.

King’s works range from $8 to $200, depending on the complexity of the design and materials involved. Each individual bead takes up to 7 minutes to make, and no two are exactly alike. King sources all her materials from Italy, and says she brings suitcases of glass tubes home each time she visits.

Sharing her art with people in the area is one thing King says she loves about her work, because there aren’t many, if any, local artists who work with glass.

“I love being able to show this to people, because before I saw it, I had no idea you could melt glass,” she said. “I mostly wing it. I do get a lot of inspiration looking at other jewelry and the styles of jewelry in movies, but as far as drawing it out beforehand, I don’t do that.”

King says she’s always been an artist, and that her parents’ support is a significant part of her success. The junior art major at Ole Miss says she prefers the solitude that comes from working in her backyard studio.

“My parents were freaked out a little bit [about the craft], but they’ve always been so crazy supportive, they were just like, ‘Don’t do it in the house,’” she said. “I tried to do theatre, actually, but art just seems more me. Theatre is like a group project, and art is just me, and I prefer it that way.”

Murano glass isn’t the only skill she learned in Italy, however. At the moment, the beads are her most profitable venture, but she says her true love is printmaking.

“Printmaking, it’s a passion for me. I’ve been doing it since I was 15, and I’ve done pretty much every technique there is,” she said. “I’ve always seen [the beads] more as a hobby, and the printmaking more as a serious thing.”

She has worked with both zinc and plexiglass plates, and created a variety of prints, from a portrait of a terrier named Dixie to an interpretation of a Renaissance landscape.

Throughout both the printmaking and glasswork, King says the most important skill she learned in her studies is to keep moving.

“One thing I remember is ‘the dance of the fire,’ which is the technique to always keep your bead moving when you’re working on it,” she said. “That’s really important, making sure the bead is constantly rolling, because if I don’t, it’ll fall down and lose its shape.”

To see more of King’s work, visit her website at https://squarespace.com/store/angela-king-glass-art-llc, or stop by her booth at Maker’s Market or Double Decker Arts Festival.