Where does Wesley McGriff want to start in fixing Ole Miss’ defense? 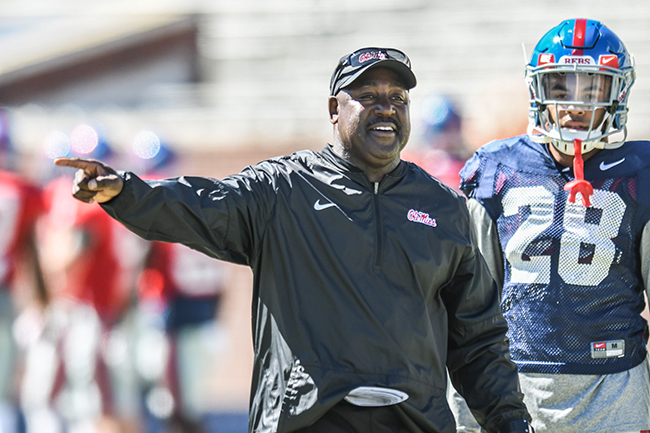 Wesley McGriff has his work cut out for him.

Ole Miss’ defensive coordinator is using the spring to get a head start in trying to fix the issues that have plagued one of the worst defenses in the Football Bowl Subdivision the last two seasons. Specifically last season in McGriff’s first in charge of the Rebels’ defense, Ole Miss finished 52nd in pass defense, 109th in scoring defense, 115th in total defense, 115th in red-zone defense and 123rd against the run.

Making things trickier for McGriff is the loss of his most productive players. The Rebels ranked 37th nationally with 29 sacks, but rush specialist Marquis Haynes and Breeland Speaks, who accounted for nearly half of those (14.5), are preparing for this year’s NFL Draft. So is linebacker DeMarquis Gates, who led Ole Miss in tackles each of the last three seasons.

What’s left is a mixture of experience and youth that, for the most part, still has to prove itself against SEC competition. The group won’t really get a chance to do that until the fall, but McGriff’s unit can work on playing unencumbered now that it’s not learning a new system like last spring, something that’s at the top of McGriff’s to-do list.

“If we can improve our awareness and our intelligence, there comes your speed,” McGriff said. “We’re going to play a lot faster. We’ll be a lot more mature, and we can populate the football. If we can recognize the formation, have a lot more awareness and play smart, then we’ll be a faster defense and we can eliminate those explosive plays.”

Safety Zedrick Woods, a three-year starter, is back as the most seasoned contributor on that side of the ball while rising junior Josiah Coatney (65 tackles, eight tackles for loss) returns on the interior of the defensive after a breakout season last fall. Benito Jones will again anchor the line at nose tackle while Victor Evans and Qaadir Sheppard are frontrunners to replace Haynes and Speaks on the edge, though Jones and Sheppard aren’t practicing this spring because of injuries.

But linebacker is once again the biggest concern with the Rebels also losing Tayler Polk, who was Ole Miss’ second-leading tackler at the position despite starting only three games in the middle last season. Middle linebacker was a revolving door last season with Detric Bing-Dukes (24 tackles) and Donta Evans (17) also getting multiple starts there as consistency proved hard to come by, but McGriff said Bing Dukes, who’s entering his third and final season with the Rebels, has been one of the pleasant surprises through the first week of practices.

“He made a couple plays in (Friday’s) practice session that it didn’t look like him,” McGriff said. “He closed on a screen with a lot of speed, and he’s got more awareness now. You can see what different a year is making with him.”

This spring is an important one for the young linebackers with no proven commodities at the position. Rising sophomore Mohamed Sanogo got his feet wet a season ago, appearing in 11 games, while fellow 2017 signees Josh Clarke and Zikerrion Baker have joined the mix after redshirting last season. McGriff said Clarke and Baker have flashed this spring with their speed and playmaking ability.

“You really want to see what these young guys can do,” head coach Matt Luke said. “I’m cautiously optimistic about those guys just because I think they’ve kind of waited their turn. They’ve gotten bigger, they’ve gotten stronger and they know the system, so I’m really anxious to see them out there making calls and flying around.”

Regardless who’s taking the reps this spring, McGriff expects the communication to be better for a defense that shouldn’t be thinking as much as it was last year during a spring that was heavy on installation. That starts at Star, a hybrid linebacker-safety position in McGriff’s 4-2-5 defense.

Rising senior Cam Ordway is repping at that spot with A.J. Moore no longer around. So is mid-year enrollee Vernon Dasher, who racked up 98 tackles and scored four defensive touchdowns as a linebacker last season at Coffeyville Community College.

“That’s the key to the defense because that position has to communicate,” McGriff said. “If we can cover those slot receivers and we can communicate at that position and grow up there, we’ll be a lot better defensively.”

Reacting faster means playing faster, which McGriff hopes will start to lend itself to a more aggressive and physical style Ole Miss ultimately wants to play come the fall.

“The only way you do that is you’ve got to have a lot of confidence and a lot of endurance,” McGriff said. “When you have confidence by way of communication and you have endurance, now you can be about the business of being aggressive and physical.”