Lafayette’s season ends with loss to Hattiesburg in 5A semis 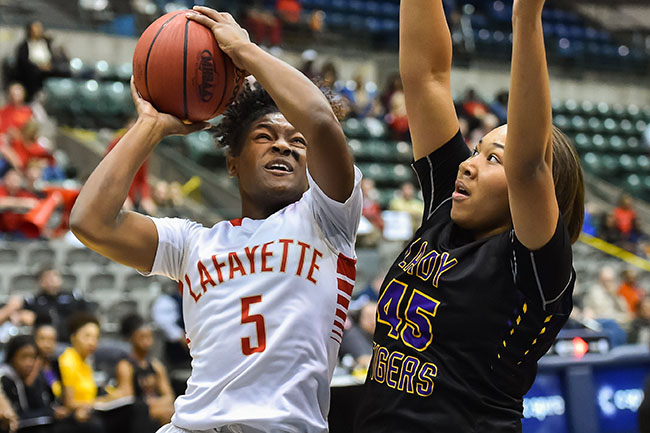 Lafayette County's Boosie Burgess (5) against Hattiesburg during the MHSAA Girls 5A Tournament held at The Coliseum in Jackson MS.(Photo/Bob Smith)

JACKSON — There will not be a second consecutive state championship for Lafayette.

The defending Class 4A state champions ran into a buzzsaw that was Hattiesburg, falling to the Lady Tigers 56-42 in the Class 5A semifinal round inside the Mississippi Coliseum on Tuesday afternoon.

Hattiesburg (25-6) advances to the 5A state title game on Friday while Lafayette (24-7) begins their preparation for next season.

The Commodores shot a porous 31.9 percent (15-of-47) from the field. Their three-point field goal percentage was better but they only took four shots, hitting two. That paired with nearly 20 turnovers created a rare performance on the biggest stage.

Hattiesburg frenetic defense was not the only thing causing issues for Lafayette. The Tigers’ offense finished with a 40.7 field goal percentage (22-of-54). It was paced by sophomore center Melyia Grayson’s 18 points. She was the only Tiger in double figures while Chelsea Ulmer and Chaise Stinson finished with 9 points each.

Grayson’s 6-foot-2 frame towered over Lafayette’s defense, grabbing passes out of the air over the Commodore’s head and outstretched arms, tossing the ball into the basket at will. She also finished with two blocks.

“I’ve faced several team teams with a big girl in preparation for this,” Linzy said. “It affected us some, absolutely. But, we missed shots that we’d been making all year and that’s tough.”

In their first foray in the Class 5A ranks the Commodores finished as one of the final four teams in the state. They return all but two players next year, including Holland, Burgess, Buford and Dixon.

“They have nothing to hold their heads down about,” Linzy said. “We were one of the smaller 5A schools in the state and we made it (to Jackson). We’re going to make it back here and that’s what I told the girls. We can make it right back here, not a problem, if we get back to work.”

Where is athletic director Ross Bjork in his search…