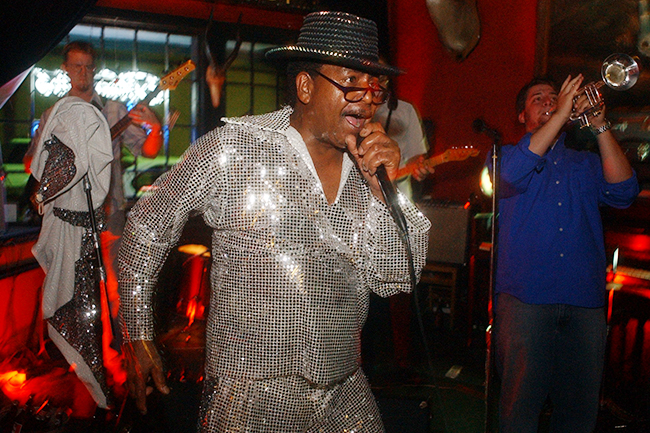 Herbert Wiley performs at the Longshot Bar in Oxford, Miss.

A memorial service for the late Herbert Wiley will be held at 11 a.m. Saturday at the Oxford-University United Methodist Church.

The service was originally planned to be held at Oxford First United Methodist, but once family members saw the outpouring of love from people all over Mississippi, they knew a larger venue was needed.

“We realized there would be a lot of people and we wanted to make sure we had enough room to sit everyone comfortably,” said Wiley’s daughter, Brandy Williams, who added she has been surprised by the community’s response to her father’s passing.

“Getting to know him through the way they saw him has been very comforting,” she said. “It just shows how great my Dad is.”

Burial will follow at Oxford Memorial Cemetery. A repass reception will take place at Oxford First United Methodist after the burial.

Wiley, an Oxford native, started playing music in high school and joined the R&B band, the Checkmates that played the blues at area clubs around North Mississippi before he took over Wiley Shoe Repair, the family’s shoe repair business, in 1969.

While Wiley is well-known for his music, his expertise as a cobbler was equally appreciated by Oxonians.

“When you have a habit of buying expensive Italian shoes, you get to know your shoe guy pretty well,” said Oxford resident, Dion Kevin. “The music was pretty awesome, and he was a master cobbler.”

In 2002, with the help of George Sheldon who opened the Longshot Bar next to Wiley’s shoe shop, the Checkmates reformed and played in local clubs, at many Oxford wedding receptions and other events. Wiley sold the shoe repair business in 2003 and continued to pursue his music.

Matt Patton, a former member of Wiley and the Checkmates and the bassist for the Drive-By Truckers and co-owner, with Bronson Tew, of the Dial Back Sound studio in Water Valley, said when he and others at the studio learned of Wiley’s death he ordered some wings and shared stories about Wiley.

“It’s hard to imagine that we would be here without first meeting this man,” Patton said. “He and (the late) JD Mark and the Checkmates were the reason I started working regularly in Oxford. I met my wife Megan after loading up the van at Proud Larry’s one night. It was how I got to know players and people here I was merely acquainted with before. One of the first projects Bronson Tew and I had on our wishlist was one with Wiley. I talked with him about it several times over the years. Even talked with some potential collaborators. Wiley told me flat out more than once he wasn’t up for it. That’s how I accepted that our time with him was limited.

“Wiley always kept those around him laughing and encouraged. An encounter with the man could refresh your soul and keep you going. Watching him perform was like getting your life battery recharged. I’m sad we won’t get to make that next record. I’m sad for Oxford losing a bright soul and a vibrant link to its tumult, triumphs and history. God bless Mr. Herbert Wiley, master cobbler, local icon of style, soul brother second to none.”

Scott Barretta, sociology instructor at the University of Mississippi and writer/researcher for the Mississippi Blues Trail, started visiting with Wiley after moving to Oxford in 1999.

“It was a pleasure to closely follow Herbert Wiley’s return to music after a multi-decade break and the subsequent successes the Checkmates had in reaching the international soul audience,” Barretta said.

Wiley enjoyed meeting new people and making them laugh and smile through his storytelling.

“My lingering memory of him is of holding court at the bar with a bright pink gin and cranberry in his hand,” Barretta said.
Wiley was a strong advocate for African American history in Oxford and helped Barretta in the creation of the “Oxford & Lafayette County Blues” Mississippi Blues Trail Marker that is located on the Square, where Wiley himself is featured.

“He also provided a lot of leads about the broader history of African American music and social life in the area,” Barretta said.

Brandon Lewis played the trumpet with Wiley and the Checkmates until 2006 when he moved to Canada and eventually, to Maryland. He moved back to Oxford last year.

“I kept telling myself I should catch up with the old man,” Lewis said. “We had some fun times and Wiley was the energizer bunny – just kept going and going. He was so much fun and so full of wit and wisdom. We had a lot of real talks that I needed to hear and wished I had paid more mature attention to.

“I’ve had a rush of memories that I have had stashed away for some time and likely would have stayed that way, but I guess I must believe that when a person passes, their soul comes to say goodbye and reignites some part of the memory on its way to rest. We’re having a good visit.”