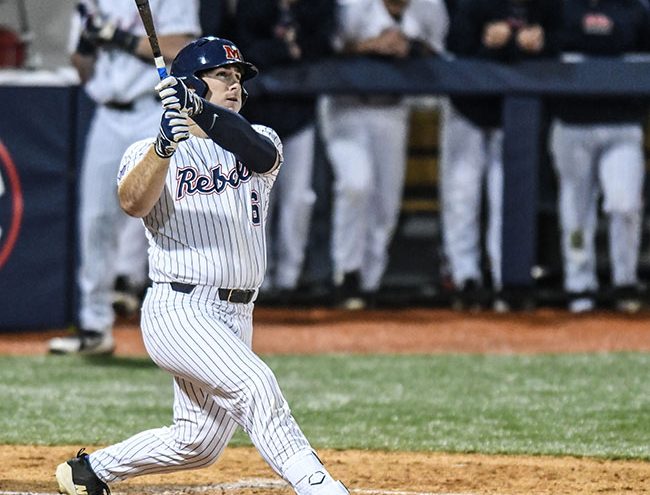 After going the entire weekend without a hit, Thomas Dillard broke out in a big way Tuesday.

Dillard hit a pair of home runs and drove in four runs in Ole Miss’ 11-4 win over Austin Peay at Oxford-University Stadium. Freshman third baseman Tyler Keenan added a three-run shot while Chase Cockrell finished with three hits, including a pair of doubles, as the ninth-ranked Rebels pounded out 13 hits in their third straight win.

“I think that’s one of the reasons we’ve been good offensively is it’s come from a lot of different sources,” Ole Miss coach Mike Bianco said. “It hasn’t been one guy that’s out of this world that’s got six or seven home runs. It just seems like every night there’s a contributor in a big way offensively.”

Seeing a heavy dose of offspeed pitches against Long Beach State over the weekend, Dillard went 0-for-12 in the series. The Rebels’ sophomore outfielder laid off the breaking stuff in his first two at-bats Tuesday to work himself into favorable counts against Kyle Wilson (0-1) and Cody Spurgeon and didn’t miss the fastballs.

Dillard drove Wilson’s 1-0 offering out to left-center field for an opposite-field homer in the second before launching Spurgeon’s 2-0 heater deep beyond the fence in right for a three-run shot to give Ole Miss (11-1) a 5-1 lead in the third. Dillard reached base in each of his first three plate appearances, drawing a walk in the fifth.

“I think in the moment I might have (pressed) a little bit, but after it’s over, you’ve just got to know that it’s over,” Dillard said of his hitless weekend. “You’ve got to move on to the next game. We play 56-plus games all year, so there’s a lot of games and a lot of baseball to be played. What’s done is done.”

Keenan’s homer came as part of the Rebels’ six-run eighth that turned a 5-4 game into a rout. Will Golsan had an RBI double in the frame as part of his two-hit night.

“I thought tonight offensively it was big-boy night,” Bianco said. “Seemed like all the big guys got in on it.”

Houston Roth scattered seven hits, walked two and struck out six in his third straight midweek start with the Governors (8-4) chasing the sophomore right-hander with five straight two-out hits in the fifth. Will Stokes (1-0) came on and got a strikeout to maintain Ole Miss’ one-run lead at the time and combined with Will Ethridge to limit Austin Peay to one hit over the final four innings.

‘It was just a tough night in the sense that it was a tough night to pitch with the wind gushing,” Bianco said. “(Roth) wasn’t real sharp with his command, and he just couldn’t get off the field. Will came in and got us off the field and gave us two shutout innings.”

Lafayette’s season ends with loss to Hattiesburg in 5A…