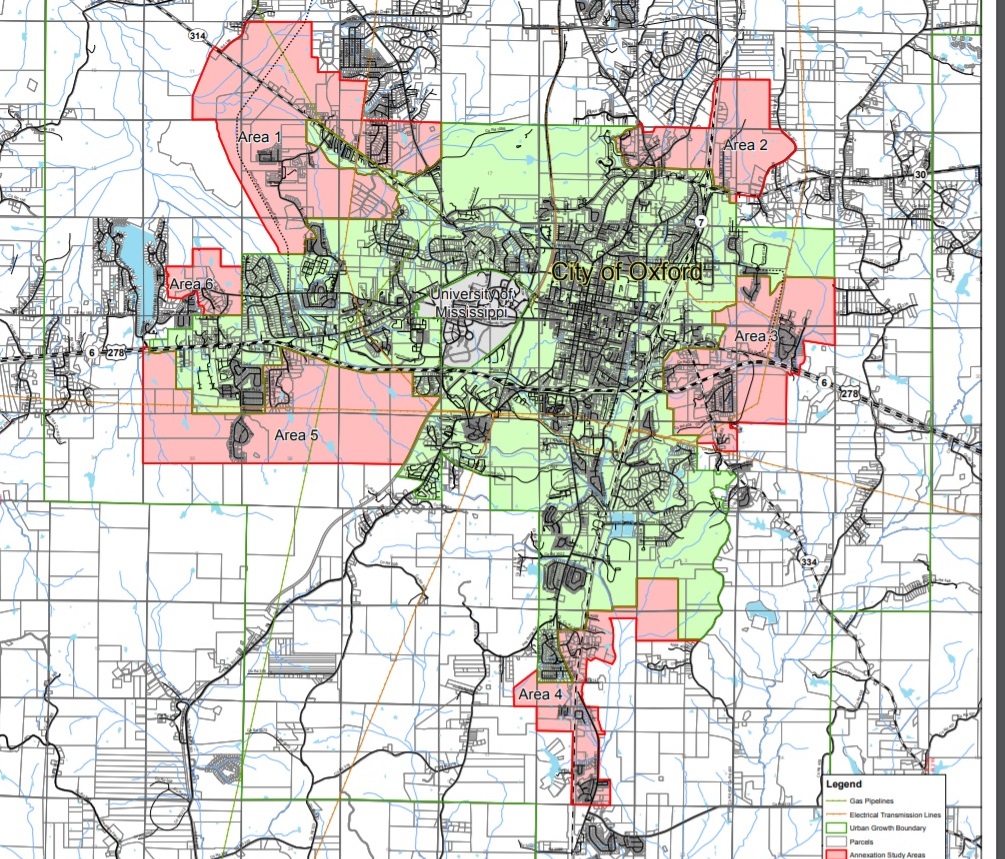 Changes to the proposed annexation map Tuesday by the Oxford Board of Aldermen created the need for another public meeting before the board can vote on proceeding to expand the city limits.

Before the aldermen can vote to approve an ordinance announcing the city’s intent to enlarge the corporate limits of Oxford, the final map with correct land descriptions must be presented to the public. Each time a change is made another public hearing must be scheduled.

The city is looking at annexing about 12 square miles of county land, and much of the land is undeveloped.

After taking public comments, the board voted to remove part of Goose Feather Tree Farm from the annexation map at the request of property owner Joe Huggins. While most of his land is being annexed, a small area to the west of the new Oxford Loop Extended is in the floodplain and unlikely to be developed.

The vote was 4 to 3 in favor of removing the property.

Aldermen voting against taking out the property said they felt the city should maintain the control over the growth of the land located next to the new $13 million road being built. Annexing the area would not prevent the property from continuing to be a tree farm. Huggins said he didn’t feel he needed to pay city taxes on the smaller strip since it would not be developed.

The board also voted to include a parcel of land located just north of the proposed annexation line off Old Highway 7, across from North Baptist Church at the owner’s request. The inclusion does not affect any other property owners.

Much of the discussion during the meeting involved whether to remove Southpointe subdivision from the proposed annexation area.

“We have nothing to gain by annexation,” he told the board.

The subdivision already receives city water and sewer services; however, it’s out of the Oxford School District boundaries, which are decided by the State Department of Education and can’t be changed by the board, even after annexation.

Mayor Robyn Tannehill said she understand the resident’s issues with having to pay a bit more in taxes; however, she said they’re already using city services and should pay for them like those already in the city of Oxford.

“Why buy the cow when you get the milk for free, right?” she said.

Alderman Janice Antonow pointed out that the subdivisions in the county that request city water and/or sewer service from the city must now sign a document saying they would not object to any future annexation attempts from the city. However, that requirement was not put into the city’s ordinances until a year after Southpointe was approved for development.

“One year earlier, they would have had to sign it,” she said.

Aldermen Rick Addy said he felt more time was needed to look at the subdivision’s request and possible boundary lines.

Once the final map is approved, an annexation hearing will be held at the Lafayette County Chancery Court where a judge will rule on whether the annexation is reasonable.