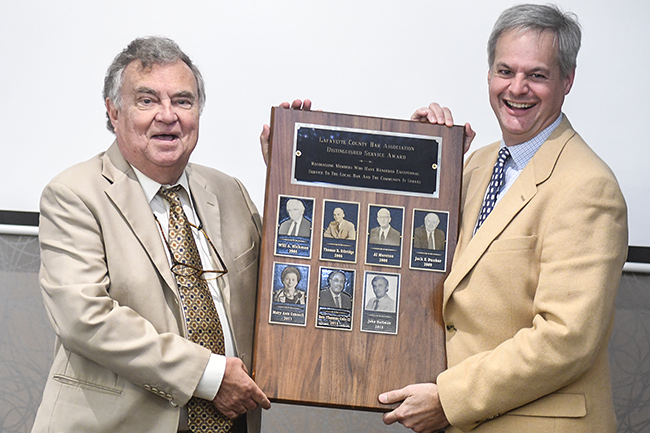 Sitting down to eat in a room full of familiar faces Wednesday, retired federal prosecutor John Hailman wore a permanent smile as he gazed around the room.

“I’ve taught many of the attorneys here today,” he said. “A lot of them are very important now.”

However, Wednesday’s lunch meeting of the Lafayette County Bar Association was more than just a reunion for Hailman — he was being given the LCBA Distinguished Service Award.

Only individuals who have rendered exceptional and longstanding service to the local Oxford-Lafayette County community as a member of its legal profession are considered for the award.

A three-person committee selects the recipients.

Other past recipients include Will A. Hickman, Tommy Ethridge, Al Morton, Jack Dunbar, Mary Ann Connell and Ben Cole, who was the last recipient in 2013.

“I didn’t know what I wanted to do after law school,” Sanders said. “When I signed up for federal trial practice for my third year, I was lucky to get John Hailman. By the end of the semester, not only did I want to be a federal prosecutor, I wanted to be John Hailman.”

Sanders eventually did become a federal prosecutor for the Northern District of Mississippi in the Oxford office and worked alongside Hailman.

Hailman began his career in journalism as a columnist for the Washington Post. He served as a nationally syndicated wine, food and travel columnist for Gannett News Service. His weekly column appeared in 100 daily papers for 15 years. He is the author of a critically acclaimed biography entitled, “Thomas Jefferson On Wine.” He has authored two books about his time as a federal prosecutor, “From Midnight to Guntown,” “Return to Guntown,” and is working on a third book about his travels as a federal prosecutor, “Far from Guntown.”

Hailman was a career prosecutor for the U.S. Attorney’s office in Oxford for 33 years. He served as Legal Counsel to the late U.S. Senator John Stennis when he was chairman of the Armed Services and Ethics Committees. Hailman served for two years as law clerk to Chief Judge William C. Keady, when the judge integrated the public schools of North Mississippi. He worked as a civil rights lawyer for both North Mississippi Rural Legal Services and California Rural Legal Assistance.

Hailman attended the Sorbonne in Paris for two years, the Universite Laval in Quebec and the National School for Magistrates in Paris. He is a graduate of Millsaps College in Jackson, holds a Masters Degree from Tulane, and his J.D. from the University of Mississippi. He was a Graduate Fellow in Trial Practice at Georgetown University Law School.

Hailman and his wife, Regan have two daughters, Allison and Lydia.

Tom Dawson and Hailman both graduated from law school the same year. The two went their separate ways for a few years until Dawson started working at the U.S. Attorney’s Office in Oxford as First Assistant United States Attorney and Associate Independent Counsel.

“In baseball, pro scouts will tell you they have a term for a ‘can’t-miss prospect,’ – a prospect that is destined for a rapid rise to the major leagues,” Dawson said. “It’s called a ‘five-tool player,’ and it is a player that can field his position, has tremendous speed and can hit with power. I don’t know what the legal equivalent to a ‘five-tool player” is in the legal field, but John Hailman has it. He’s a consummate lawyer. He’s a lawyer’s lawyer. And I had the great pleasure and honor of serving with him for over 30 years.”

Hailman said he was humbled and appreciative for the award bestowed on him Wednesday by the LCBA.

“This is just a wonderful occasion because it’s such a wonderful reunion, a true family reunion,” he said. “I thank the bar association and everyone involved in giving me this recognition and giving this old lawyer a few minutes to speak.”