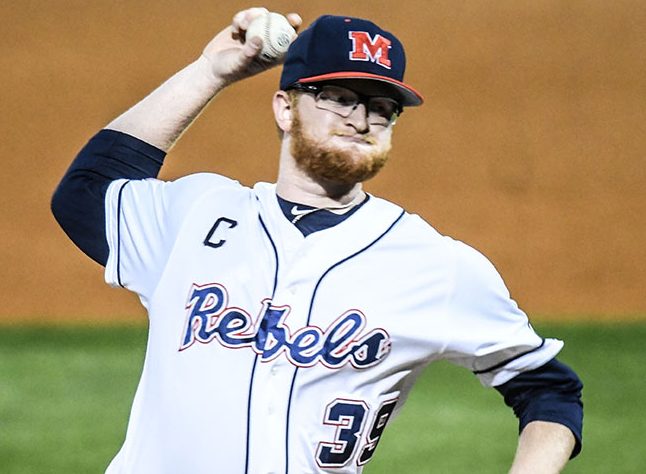 Ole Miss didn’t do much with the bats Friday night, but the Rebels took advantage of a miscue by Eastern Illinois’ defense to scratch across their first runs.

Feigl continued his strong start to the season with seven shutout innings, leading No. 9 Ole Miss to a 4-0 win at Oxford-University Stadium that gave the Rebels their fourth straight series win to begin the season. Ole Miss swept Friday’s doubleheader after taking the first game 7-2.

The teams played a twinbill because of rain in the forecast for Saturday. Ole Miss (14-1), which has won six straight, will go for the sweep Sunday at 1:30 p.m.

Feigl (4-0) turned in his fourth straight quality start to drop his earned run average to 0.81. The junior right-hander, who’s gone at least six innings each time out, used his three-pitch mix to scatter eight hits and strike out seven, giving him 25 strikeouts and just two walks in 26 ⅓ innings this season.

“The consistency of it,” Feigl said. “I feel a lot more confident with the slider. Coach and I worked on it in the fall. He said, ‘Listen, not everything has to be perfect. Just get it in there and funnel it in.’ That’s what plays up the other pitches.”

Feigl made sure to credit the defense behind him that was instrumental in helping keep EIU (5-7) off the scoreboard, including a well-executed relay to preserve the Rebels’ 3-0 lead in the seventh. Frankie Perrone belted a two-out double over Will Golsan’s head in center with Matt Albert getting a running start from first, but Golsan quickly corralled the ball and got it in to shortstop Grae Kessinger, who gunned down Albert at the plate to thwart the Panthers’ biggest threat.

“I don’t know what our fielding percentage is, but it’s got to be crazy,” Feigl said. “We went two games tonight without an error. That’s solid. And then the offense, they’re flooding me with confidence when they put runs on the board. It’s everybody just coming together.”

Ole Miss also turned a pair of double plays. Feigl got himself out of a two-on, two-out jam in the second by getting Jack Holden looking before striking out Joseph Duncan to strand two more baserunners in the fifth.

“I think some of it is just experience and confidence. We’ve been doing it all year,” Ole Miss coach Mike Bianco said. “Brady’s been doing it all year, but a lot of our guys. It’s one of the things we talked about in the offseason that we didn’t do well last year. … When the other team was having their inning, we couldn’t induce the double play or get the big strikeout. We’ve done that much better this year.”

Ole Miss had an equally hard time mustering offense, finishing with a season-low six hits. Cole Zabowski was thrown out at home trying to score from second on a wild pitch in the second before a pair of walks issued by EIU’s Blake Malatestinic (0-1) helped the Rebels load the bases with two outs in the third.

Golsan followed with a pop-up to shallow right field, but the ball landed between second baseman Jimmy Govern and Holden, allowing Kessinger and Nick Fortes to score. Thomas Dillard walked to lead off the Rebels’ half of the sixth and came around to score on Zabowski’s groundout before Dillard singled home Ryan Olenek two innings later.

Will Ethridge retired six of the seven batters he faced over the final two innings and struck out two to pick up the save.