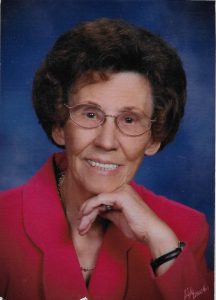 Mary Eddie Parks Davidson passed away March 1, 2018, at her residence in Stillwater, Okla. Funeral services will be at 10:30 a.m. on March 16, 2018, at the Strode Funeral Home Chapel in Stillwater with the Reverend Paul Jones officiating. Interment will follow at Sunset Memorial Gardens.

Mary was born in Oxford, Miss., on Feb. 17, 1924, to James Edward Parks and Angielion Pennington. She graduated from University High School in Oxford in 1942. She married Ephraim Edward (‘Ed”) Davidson in 1948 and by 1949 was starting to have one of her five baby girls. Mary worked several years for the First National Bank in Oxford before moving to Stillwater in 1968 when her husband, Ed took the position of the OSU Vice President for Business and Finance.

Mrs. Davidson lived for her family. She loved cooking, quilting, china painting, antiquing, garage sale hopping, gardening and just spending time with Ed, her girls and their families. Mary and Ed loved to entertain and played chicken scratch with friends. After the girls were grown and gone, Mary decided to enter the real estate field and went to work for Century 21 Preston Agency, Homes of America and later – she and her daughter, Vicki, bought and ran Bryan Agency until her retirement.

Mary loved the Lord and was an active member of the First Baptist Church in Stillwater. She was also a member of Stillwater Women’s Club, Antique Hunters Club, Arts & Humanities, Sewing Circle, Lois Glass Round Table, WMU President, Lahoma Club Newcomers President (1969-1970) and an honorary member of Kappa Delta Sorority.