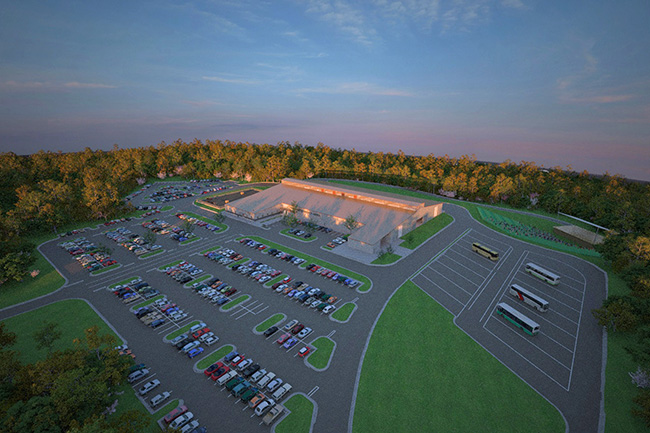 The proposed Lafayette County Business Center and Arena projects are one step closer to reality.

The Lafayette County Board of Supervisors awarded bids for the two multi-million-dollar projects during a special meeting Thursday morning, where they discussed the recommended options and final estimated costs.

The business center and arena will be built on about 50 of the 160 acres owned by the county off County Road 406. Another portion of that plot of land will be leased to the Lafayette County School District for the construction of a new elementary school.

“While we had hoped for one general contractor for both projects, it appears the lowest and best bids will require two,” Alger said.

The business center contract was awarded to Tupelo-based Century Construction Group, Inc., totaling $7,878,000. The center will include spaces for several county offices, including Child Protective Services, Department of Human Services, Coroner’s Office and Justice Court, all of which need updated facilities and more space. It will also include the Oxford Municipal Court, which is currently located in City Hall but has outgrown the space.

The arena contract was awarded to Flagstar Construction Company, Inc., a Pontotoc firm that made an offer that is significantly cheaper than the competition.

“We had a couple of bids [for the arena]. The second and third-lowest bids were one-tenth of one percent apart,” Alger said. “Flagstar Construction Company basically came in and went low, and they’re $230,000 lower than the other two.”

Flagstar’s offer for the arena construction came in at $4,965,000. The arena will be the county’s first dirt floor arena for indoor and outdoor use, with concrete around the outside for seating and concessions. Flagstar Construction has worked on projects across the state, including renovations to the emergency room at UMMC in Jackson and construction of the Grammy Museum in Cleveland, Miss.

According to the contracted project manager Casey Rogers, of Innovative Construction Management, the next steps towards breaking ground will include a preconstruction meeting in the next two weeks and bringing utilities to the site.

“The schedule for the business center is looking like 330 days, and the arena is looking like 300 days,” Rogers said. “We’re working with utility companies to get water, electricity and sewer out there now.”

Alger also mentioned the possibility of a rise in the price of steel and the impact that could have on the projects, referencing recent actions made by President Trump.

“As you know, we could have a tariff. The metal building people sent out a note going, ‘We don’t know what’s going to happen, but just so you know, 25 percent is a real thing,’” he said. “So we want to get the steel ordered as fast as possible.”

The meeting closed with the supervisors entering an executive session.

For more information on the supervisors or the Lafayette County Business Center and Arena, visit www.lafayettems.com.