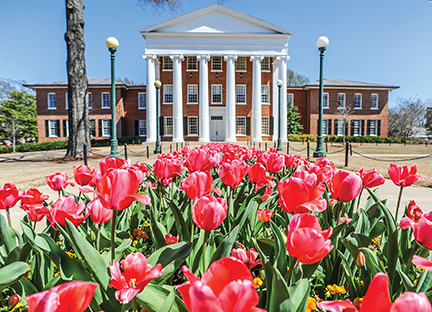 The Chancellor’s Commission on the Status of Women at the University of Mississippi recently released the 2017 Pay Equity and Advancement Report.

The report presents data compiled from 2007 to 2015, and illustrates the differences between salaries of employees in each school, from clerical jobs to the most senior professor positions.

Dr. Laura Antonow, one of the professors who worked on the report, said the team’s goal is not to analyze the data but to collect it and present it as a call to action for the university.

“The systemic nature of it, if you look at it within comparable ranks of time, the same department, if you look at things across the board, there does seem to be a trend that women, with the same time in rank, tend to be paid less,” Antonow said. “The goal is to be on top of that, making sure that if that is the case, there’s some kind of intentionality behind why there’s a pay difference like that.”

According to the report, gaps in salary have decreased since 2007, the year the last pay equity report was published.

Dr. Kate Kellum, who worked on compiling data for the report, said that while not all of the data at the university shows women earning less than men, national statistics disproportionately favor men over women.

“The data are clear. There is a systematic difference in men and women’s salaries,” Kellum said. “Now, any one individual, of course there’s always going to be outliers, but the data are clear. We get paid less.”

The report initially divides data by school and position. Within those parameters, the data is separated by gender and race, with categories for white men, white women and African-American women.

The decision to only report statistics for those three groups instead of breaking down the data further, Kellum said, is to present broader information that can be examined further by those the university appoints to study the data, should they choose to do so.

However, she did not confirm or deny whether further categorizing the data by department, gender, years in rank and level of education would alter the report’s overall outcome.

“I’m going to be careful here. I hope not, but nationally, the data are very clear that there is a difference, and I suspect there is a difference here as well,” she said. “There are so many little decisions that go into what somebody makes. Sometimes it’s negotiation, sometimes it’s perception of the prestige of research. We focused on faculty, but these inequities existed at every job except for clerical.”

Antonow and Kellum said there was not a high enough percentage of African-American men and other minorities in faculty positions to include in the final report.

In the school of social sciences, the difference between the salaries of male and female professors (the highest rank measured) is 80 percent.

When further dividing the female statistic into black and white female categories, the data becomes more thorough. In the business school, for instance, those at the instructor level have all been there for the same median amount of time. However, white females are making 64 percent of what white males make. African-American female instructors fare slightly better, earning 87 percent of the median white male salary.

The data shows the school of pharmacy displays the most salary equality throughout all ranks.

Another issue that goes beyond the university and affects the whole state concerns equal pay legislation. While the Kennedy-era Equal Pay Act made it a federal crime to pay women less than men solely based on gender, Mississippi is one of two states that does not have an equal pay law.

Antonow said state legislation is still necessary to ensure equal pay for all people because federal and state laws have “different enforcement mechanisms.”

“If you’re at the federal level and you’re trying to enforce that law in 50 states, that’s almost unmanageable. We’re one of two states that doesn’t have it, so what do we know that all these other states don’t? The answer is, nothing,” she said. “It’s much easier to manage if you’re looking at your state employment guidelines. When there’s a state law, it’s just an added level of enforcement, because right now, it’s clearly not being enforced.”

According to a recent study titled, “The Simple Truth about the Gender Pay Gap,” released by the American Association of University Women, the state of Mississippi ranks 43rd out of the 50 states and Washington, D.C.

The rank is based on the median annual earnings for year-round workers and divided by state and gender. Mississippi’s earnings ratio is 75 percent. By comparison, New York ranks number one, with women earning 89 percent of what men earn, while last-place Louisiana has a 70 percent earnings ratio.

The office of Provost Noel Wilkin issued a response to the report on behalf of the university. The response stated the university’s commitment to working with deans, directors and department chairs to develop mechanisms to correct problems of gender pay and advancement inequity.

Some of those mechanisms include: monitoring gender equity progress annually in an open and transparent manner, providing budget instructions about identifying gender wage equity problems and exploring ways to increase pay and advancement opportunities for those making less than $25,000 (the majority of whom are female).

“Although progress has been made, much more needs to be done,” the response said. “Through these efforts and actions, we expect to improve the diversity of our community of scholars, increase the competitiveness of our recruiting and retention efforts, and ensure fair pay to those in our faculty and staff.”

According to Kellum and Antonow, the next step regarding the data is up to the university.

“I think that one of our primary recommendations is that looking at the data becomes somebody’s job. And there are structures in place on campus, within existing jobs, so that’s doable,” Kellum said.

Those interested in learning more about the 2017 Pay Equity and Advancement Report can attend the town hall meeting at the Overby Center Auditorium on March 26 at 4 p.m. To read a full copy of the report and the provost’s response, visit http://ccsw.olemiss.edu/.