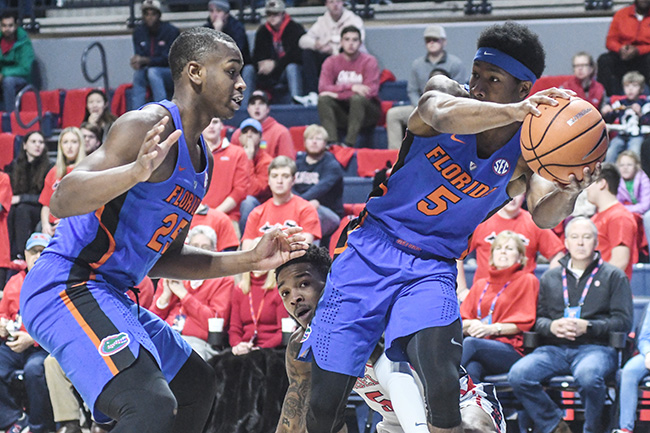 Florida's KeVaughn Allen (5) comes up with the ball against Ole Miss' Markel Crawford (5) as teammate Keith Stone (25) looks on at the Pavilion at Ole Miss in Oxford, Miss. on Saturday, January 13, 2018. (Bruce Newman, Oxford Eagle via AP)

From the top seed in the NCAA Tournament — Virginia — to those that barely made it into the bracket — Arizona State and Syracuse — it feels as though everyone involved in March Madness is on the bubble this year.

College basketball is in trouble.

The brackets came out Sunday, replete with the usual fanfare that accompanies America’s biggest office pool. Villanova, Kansas and Xavier joined Virginia as No. 1 seeds, but they, along with the other 64 contenders, will play against the backdrop of an investigation-riddled season in which bribes and payoffs made bigger headlines than 3s and layups.

The tournament begins Tuesday with opening-round games featuring a matchup of bubble teams UCLA and St. Bonaventure, then kicks into full swing Thursday and Friday at eight sites around the country.

The Final Four is March 31 and April 2 in San Antonio. Shortly after that, a commission led by former Secretary of State Condoleezza Rice is expected to deliver recommendations from an investigation triggered by an FBI probe that led to charges last fall against assistant coaches, agents, employees of apparel companies and others.

No fewer than a dozen teams in the tournament have been named either in the FBI investigation or in media reports that allege coaches and others have directed payments and improper benefits to recruits and players — thus, breaking rules that go to the core of the amateur-sports code that defines both the NCAA and the “student-athletes” who make this billion-dollar business run.

They range from teams that made it into the tournament off the so-called bubble — Alabama — to one of the best teams in the country. Arizona, a No. 4 seed in the South, has been roiled by a report that wiretaps caught coach Sean Miller discussing a $100,000 payment to freshman Deandre Ayton. Miller has strongly denied the accusation, though the story line figures to follow the Wildcats through what could be a long run in the tournament.

The chairman of the NCAA selection committee, Bruce Rasumussen, has said the investigations played no part of the bracket-filling process.

And yet, it’s hard to imagine there weren’t some sighs of relief in the NCAA offices when some bubble teams’ names were left out of the field. For instance, Louisville has lost its coach (Rick Pitino), athletic director (Tom Jurich) and latest national title (2013) in the culmination of scandals that have slammed that program for the better part of this decade.

Given the widespread nature of this corruption, there’s at least a chance that whoever cuts down the nets in San Antonio could eventually suffer the same fate as the Cardinals .

The Southeastern Conference’s push to improve in men’s basketball finally has paid off in record fashion.

The conference best known for cranking out national champions in football landed a league-record eight teams in the NCAA Tournament on Sunday. That easily topped the six teams the SEC has put into the tournament nine times, most recently in 2008.

SEC Commissioner Greg Sankey quickly took to Twitter to remind everyone of the league’s record haul.

“We are proud to have an @SEC record 8 teams in the 2018 NCAA Men’s Basketball Tournament,” Sankey wrote. “This achievement is a reflection of the commitment our universities have made to support men’s basketball. Good luck student-athletes, coaches & fans during #March Madness. #ItJustMeansMore.”

Tennessee, which split the regular-season title with Auburn, is the SEC’s top-seeded team at No. 3 in the South. Kentucky, which beat Tennessee 77-72 on Sunday for the SEC Tournament title , wound up seeded fifth in the same region. Auburn wound up seeded No. 4 in the Midwest Region.

Kentucky coach John Calipari said Sunday that he loved the SEC getting eight teams into the tournament, proof the league finally is past the point of a loss costing programs dearly. Calipari said the SEC helped itself by recruiting good players and with improved strength of schedules, something coaches and officials worked on across the league.

Calipari also cautioned against taking the SEC lightly a year after South Carolina was one of the biggest surprises of the tournament. The Gamecocks reached the Final Four for the first time in school history last year.

“This league will do damage,” Calipari said. “It’s been doing damage. They just haven’t let more teams in. We have teams borderline that should have advanced that didn’t get in. Now we have eight teams in.”

The SEC’s other teams include ninth-seeded Alabama, No. 7 seed Arkansas, sixth-seeded Florida, No. 8 seed Missouri and No. 7 seed Texas A&M.