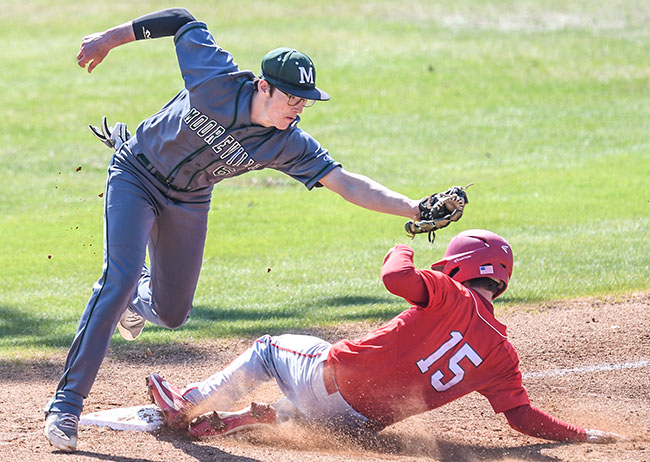 If Lafayette is going to compete with the best in Class 5A, they will have to play more inspired than they did on Monday.

The Commodores split their pair of games in the Oxford High Spring Break Tournament at Edwin Moak Field with a 2-1 win over Mooreville and a 8-3 loss to North Pontotoc.

In their first game with the Troopers, Lafayette (4-3) struggled to get their bats going in what proved to be a pitcher’s duel that took a swift 90 minutes to complete.

Wilson Varner was nothing short of efficient for the Commodores in Game 1. The freshman pitched a complete game giving up one run on two hits while walking one and striking out three Mooreville batters.

“The best outing we’ve had probably from anybody all year,” Lafayette coach John Walker said. “A ton of strikes. Down in the zone, a lot of soft contact. Defense played well. That was the story of that game because the bats weren’t there.”

Lafayette’s two runs came in the fourth inning to break what had been a scoreless tie the first 3 1/2 innings of play. Outside of the RBI by left fielder Hunter Coleman the offense was lacking, going a combined 6-for-24 at the plate. Andrew Peugh of Mooreville (3-5) went four innings, giving up two runs off five hits and struck out two batters.

Mooreville’s lone run came when designated hitter Will Armstead scored in the top of the fifth inning.

While the Commodores managed to manufacture a win without an offense in their first game of the day the second game was much sloppier.

“We weren’t really able to get on base and get into our pressure game,” Walker said. “That was the just of it. We took some absolutely horrible at-bats. No plan. Just going up there looking like we’re kind of swatting at bees at times. That’s not what’s going to allow us to be successful.”

Lafayette went 5-for-27 against the Vikings’ pitchers. Brandon Thomas went 3 1/3 innings in his start for North Pontotoc. He allowed one run on two hits while walking three and striking out one.

For the Commodores, Zach Meagrow got the start and went six innings. The junior allowed six runs off four hits and walked two while striking out four Viking batters.

The offense in the second game came in the fourth inning when Lafayette took advantage of four Viking errors.

“Just an ugly game all around for us. Not a lot of effort,” Walker said. “I thought the first game we were locked in. I think we got complacent and satisfied with one win today. If we’re going to get to the level that we need to be at and the level we’re capable of, splits on Spring Break days are not going to get us there.”

Lafayette will play Caledonia on Wednesday at 4:30 p.m. as part of the Oxford Spring Break tournament before closing out the week with a game against the Chargers on Thursday at 6:30 p.m.