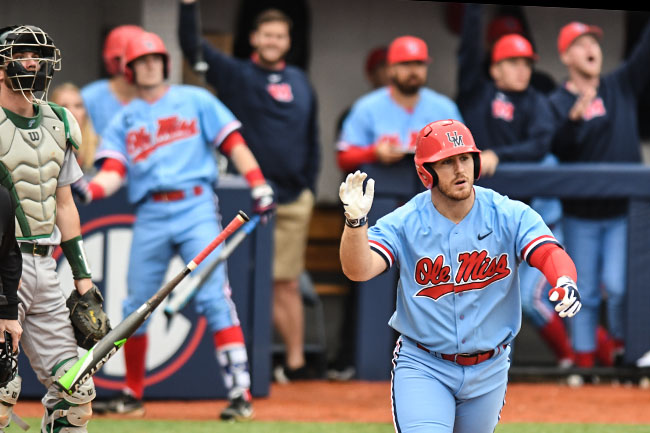 After a freshman season where all three had to transition from being an elite high school player to learning the ropes as a Division-1 baseball player they are ready to contribute. Through a third of the season they are doing just that.

Dillard is tied for the team lead in home runs (4) and second in batting average (.350), Kessinger is thriving as the leadoff hitter and Roth has become a dependable midweek starter.

In 2017 Dillard played in 48 games — starting in 45 — and hit a meager .206 for 12 RBIs and four home runs. In 18 games his sophomore season he has already tied his career-high in home runs and has a batting average nearly 150 points better. Dillard’s on base percentage is currently 160 points better than a season ago as well.

“You just kind of appreciate everything a little more,” Dillard said of his sophomore season. “You’re not pressing so much. You just coming to the field to have fun. I think that’s’ one of the things that’s helped me. I don’t think it’s anything mechanical or approach-wise.”

A year ago Kessinger was consistently sitting in the nine-spot of the batting order. Struggling to adjust to becoming the starting shortstop for an SEC team the Oxford native had less than desirable results. Batting .175 and recording just seven extra base hits, Kessinger took a different approach to his second campaign with the No. 8 Rebels and took the stress off. It has helped at the plate with a .338 average, putting him just behind Dillard, and in the field with only one error recorded compared to 10 he had last season.

“Staying consistent with what I want to do,” Kessinger said. “In the field, everywhere. It doesn’t matter how one games goes or one pitch goes. Just sticking with your approach and staying true to who you are and I think that’s really helped me.”

Two of the former Chargers are taking care of business at the plate and in the field while the third member of the trio has solidified himself on the mound. Houston Roth has become one of the go-to starters out of the bullpen for midweek games. The sophomore is excelling in the role. Even though the earn run average is currently 4.98 the right-hander has a 2-0 record in five appearances and recorded 29 strikeouts, putting second behind Friday ace Ryan Rolison’s 32. Roth worked 28.2 innings last season, this year his is already at 21.2 innings worked.

“I think Houston’s been able to handle the blows,” Ole Miss coach Mike Bianco said. “It hasn’t always been pretty for him as far as the score and the result. …As a starter your goal is go deep into a game and give your team a chance to win. Houston does that for us.”

Tonight the trio gets their second crack at SEC baseball with the conference slate of the schedule set to begin with a weekend series against visiting Tennessee. The first game is set for a 7 p.m. first pitch with Saturday and Sunday’s games scheduled for 1:30 p.m. Last season the Rebels finished conference play at 14-16.

“When this time of year comes around the feeling in the air gets special,” Kessinger said. “You got to come to play everyday (in SEC play). No matter how Friday goes, Saturday, Sunday. Doesn’t matter. All these teams can beat you any given day. Be mature.”