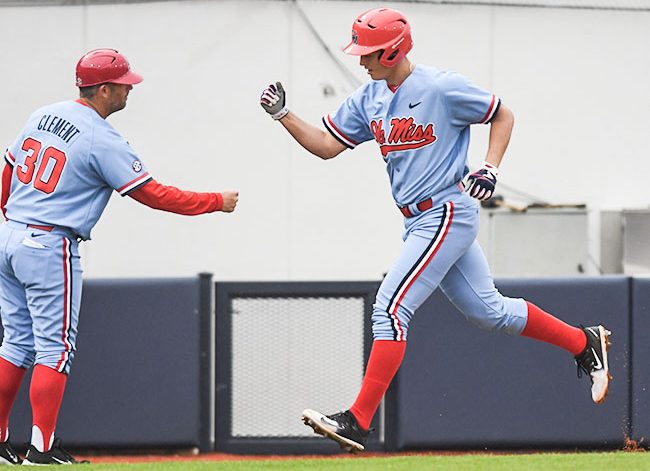 Ole Miss is on pace for a historic start to its season.

The Rebels’ eight-game winning streak to open the campaign was interrupted by a one-run loss to Long Beach State in the teams’ series opener two weekends ago. Since then, Ole Miss has ripped off nine straight wins that have the Rebels ranked as high as No. 8 in multiple national polls and tied with Auburn for the best record in college baseball.

A sweep of Tennessee this weekend when the teams begin SEC play at Oxford-University Stadium would give the Rebels (17-1) 20 wins in their first 21 games, something Ole Miss has never done. The best start in program history came in 2009 when Ole Miss began 19-1 en route to a share of the SEC regular-season championship.

Friday’s game will start at 7 p.m. Saturday’s first pitch is set for 1:30 p.m. before the teams wrap up the series Sunday at the same time.

“I don’t think there are a lot of surprises. I’m happy we’re playing well,” Ole Miss coach Mike Bianco said. “I don’t mean to sound too cocky, but it’s a long season and you’ve got to continue to play well.”

Led by preseason All-American Ryan Rolison (3-1, 2.28 ERA) and fellow weekend starters Brady Feigl (4-0, 1.03) and James McArthur (2-0, 1.74), the pitching has been the strength Bianco thought it would be before the season. The bullpen has helped, allowing just three runs in its last 18 ⅔ innings, for a staff that ranks third in the SEC in earned run average (2.29) and leads the league with 183 strikeouts.

It’s the offense that’s been more consistent through the first month of the season after struggling most of last year. The Rebels are putting pressure on defenses more often than not — LSU is the only team in the league that’s struck out fewer times  — while hitting for average (.301) and power, ranking in the top half of the SEC in home runs (25) and slugging percentage (.483).

Ole Miss exploded for 16 runs its last time out Wednesday to outscore Georgia State 21-5 in a midweek series. The Rebels have an average margin of victory of 6.2 runs during their winning streak.

Chase Cockrell and Thomas Dillard have spearheaded the improvement. Cockrell is hitting a team-best .486 in 35 at-bats as the Rebels’ primary designated hitter while Dillard is next at a .350 clip after hitting just .206 a season ago in his transition from Oxford High to the collegiate level. Dillard’s four home runs are tied with Nick Fortes for the team lead and already match his total from all of last season.

Shortstop Grae Kessinger (.338, six doubles, 11 walks from the leadoff spot) and catcher Cooper Johnson (.257, two home runs) are also off to faster starts with the bat after each hit below the Mendoza Line last season as freshmen.

“Not so much with us internally because we thought we could hit, but last year, that was the big stigma or the big label on us,” Bianco said. “But it’s not a surprise for us. Some of the kids that maybe struggled last year are off to great starts.”

Tennessee (12-6) was picked by SEC coaches in the preseason to finish last in the Eastern Division and finds itself in that spot heading into the weekend, though the Vols have reeled off four straight wins since being routed by James Madison 21-2 on March 7. Catcher Benito Santiago, the son of former Major Leaguer Benito Santiago, is a threat in the middle of the Vols’ lineup with a .394 average and 13 extra-base hits.

Left-hander Garrett Crochet (1-2, 3.57) will oppose Rolison in Friday’s opener. Right-hander Garrett Stallings (3-0, 2.45) will get the ball for the Vols on Saturday. Tennessee has yet to decide on a starter for Sunday’s finale.