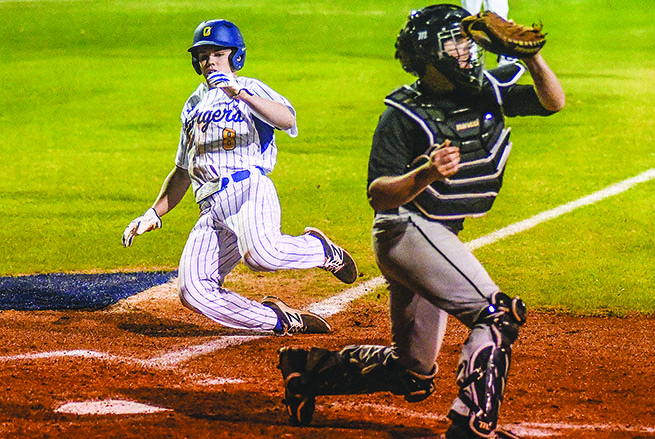 Another night where the top of the order struggled and another night where Oxford found a way to manufacture a win. The Chargers defeated Cleveland Central 6-3 to close out the third day of the Oxford Spring Break Tournament at Edwin Moak Field.

“We were pretty dead,” Oxford coach Chris Baughman said. “We just kind of went through the motions tonight. A win’s a win and we’ll take it. …If we’re going to make a run the top half of the order’s got to produce.”

The bottom half of the lineup picked up the slack going 5-for-12 (.467) and Tyler Smith having a 3-for-3 night at the plate. Catcher Clay Ivy went 1-for-3 with two runs batted in. Designated hitter Bo Gatlin recorded the Chargers’ only other RBI.

After Cleveland Central (3-7) tied the game at 2-all in the top half of the fourth inning the Chargers plated three runs in the home half of the frame to break the game open. Oxford took advantage of six errors committed by the Wolves.

With the offense still continuing to sputter at times in the early part of the season pitching has been a bright spot for Baughman. Owen Bruce made his first start of the season and gave the Chargers’ bullpen a much-needed rest heading into next week’s region schedule. Bruce pitched a complete game on 95 pitches, giving up two runs, walking two batters and striking out three Cleveland Center batters.

“(Bruce) struggled some with his off-speed pitch but he just kind of grinded through and made pitches when he needed to,” Baughman said. “I was coming to get (Bruce) if he didn’t get (the last batter). I knew I wasn’t going to use him until next week so I knew I could extend him some and we needed to extend him to just keep the rest of the arms that we have this week available.”

Oxford closes out their tournament with a game against Caledonia at 1 p.m. and then play their first of two games in the next nine days against crosstown rival Lafayette at 6:30 p.m.

Tarver shines
Lafayette played their third game of the tournament earlier in the day, coming away with a 2-0 win over Caledonia. The Commodores (5-3) were carried by the arm of freshman Taylor Tarver, who pitched a complete game. Tarver went seven innings without giving up a run off two hits, walking two and striking out four Confederate batters.

“(Tarver) was outstanding,” Lafayette coach John Walker said. “You can’t ask anything else from a ninth-grade arm. He just threw tons of strikes. Got a lot of ground balls. …anytime you’re able to kill innings with double plays by pitching down in zone and getting soft contact is going to give yourself a chance to win.”

Lafayette scored a run in the home half of the first inning and the insurance run in the bottom of the fifth. Catcher Marshall Merchant went 1-for-3 with an RBI and Hunter Coleman was 2-for-2 with the Commodores’ other RBI.