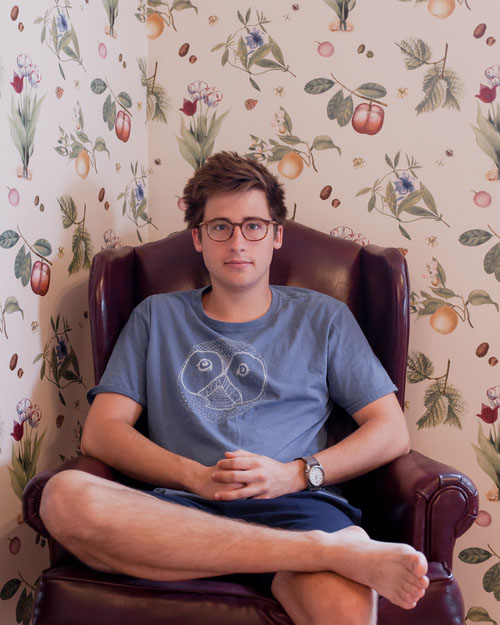 Rock Eupora will be performing at Proud Larry’s on the Square tonight with a full backup band of extremely talented Nashvillians.

While the name sounds like a band, Rock Eupora is actually just one guy — Clayton Waller. This Jackson, Miss. native single-handedly recorded and produced two fantastic albums—Blanks in 2014, and Soon the Sun Will Come in 2016. He played every single instrument on each album, and did all the vocals, too — including the background vocals, multi-layer harmonies, and some really interesting effects he produces with his mouth and other tools from his homemade studio. Rock Eupora’s sound is where lo-fi meets a conglomeration of pop, rock, punk, folk; as well as an array of psychedelic-surfer effects right down to the doo-wop vocal styles. Waller himself calls his definitively unique sound “Gritty Rock + Shimmering Pop.”

The outstanding tune “Sally Kate” from Soon the Sun Will Come opens the album with a surprising and totally unexpected beat-box groove that stands alone as the intro to the song…nothing but beat-box. I thought the sound must have come from a synthesizer — maybe a drum machine. But, I should not have doubted Waller, who confirmed that it is all him. This is just one example of how innovative he is, and his talent as a performer goes far beyond being able to beat-box with the best of them.

In 2014, Waller was a senior at Mississippi State. During a two-week voluntary retreat into the solitude of his own home, he made his first album, Blanks. He stayed in a “tiny little living room” and worked constantly — expertly layering every guitar riff, drumbeat, bass line and vocal with some really cool effects (think psychedelic-surfer-style, reverb-saturated, perfectly distorted, whimsical and fun). I love both Rock Eupora albums, but Blanks just gets me right in the heart. Even though I am a Generation Xer, and Waller is not (he’s a Y); Blanks takes me back to my own college days — just beginning my life-long adventure into the world of music — one that would change me, and my life, forever. That is the miraculous power of music. And I hear that power running throughout both Blanks and Soon the Sun Will Come. But Blanks gives me that same sense of understanding and solace I first found in the music of my generation (Beanland, the Kudzu Kings, George McConnell)—the feeling that I had a friend in that music, that I was not a freak; that there were, in fact, others out there like me…people who would accept me for all that I am and love me for it.

Check out the music video for the song “Side by Side” from the album Blanks. Waller described the making of the video for me: “I really like to involve my friends in whatever I can. They’re all so great and talented! The video was filmed at my house in the spring semester of my senior year at MS State. That was a really special time because it was the listening party for my first album as Rock Eupora [Blanks]. The album had been released that day, and so I threw I party to celebrate it with my friends.” The video will take you back to your glory days…no matter what generation you belong to.

“I Wanna Be Alone” is a great song from Soon the Sun Will Come, and the video is a must-watch. It is a funny spoof of the party culture that is associated with college life. “Haunt” is another song from Blanks that is of note, and the video is well worth watching. The video is quite artistic and speaks for itself in symbolism. I will let you decide for yourself the symbolism of the mud falling onto Waller’s head and upper body during the video. It’s a pretty accurate metaphor for how we all feel during a bad breakup. But watch it all the way through. As so often happens in life…there’s redemption in the end.

Rock Eupora will be performing at Proud Larry’s on the Square in Oxford on Thursday, March 15, 2018, with a full backup band of extremely talented Nashvillians. The opening act is Brother Moses from Fayetteville, Ark. Doors open at 8 p.m. Tickets are available in advance for $5 on the Proud Larry’s website, on Ticketfly, or may be purchased the day of the show at Proud Larry’s. Come out and support this amazing Mississippi music man! I guarantee you will be glad you did!