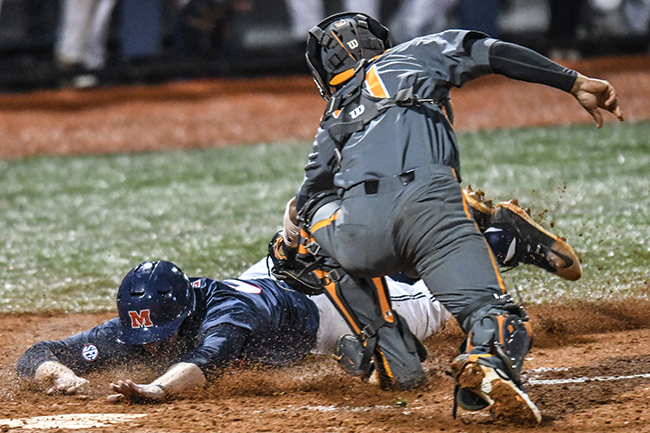 Ole Miss has shown resiliency all season but on Friday they finally found a deficit too insurmountable to overcome.

The No. 11-ranked Rebels fell 8-6 to Tennessee in each team’s Southeastern Conference opener at Oxford-University Stadium. The loss snapped a nine-game win streak for Ole Miss (17-2, 0-1 SEC)

Ryan Rolison had a rocky start to his outing but stabilized after giving up two runs in the top of the second to tie the game at 2-all. The Friday ace went 6 2/3 innings giving up five runs, two earned, off 10 hits and managed to strike 11 batters and walked three.

The pivotal moment of the game came in the seventh when Rolison was pulled after issuing a walk to third baseman Wyatt Stapp to load the bases for Tennessee (13-6, 1-0). Will Ethridge came out of the bullpen for relief and gave up a two-run double three pitches into his outing. He then gave up a 3 RBI triple to center fielder Brodie Leftridge to blow the game open at 7-2.

“I felt good as good as I did coming out of the gates as I did in the seventh. I was ready to finish that,” Rolison said. “I made a pitch on 3-2 that walked (Stapp) and it was the best situation to go to the pen there.”

Tennessee added one more run in the seventh off passed ball.

As has been the case all season the Rebel offense responded with a loud inning of their own in the home half of the seventh. They scored four runs — all with two outs — to cut the deficit to the final margin.

The inning got started with a one-out RBI single from second baseman Jacob Adams to score third baseman Tim Elko. After a single from shortstop Grae Kessinger, Ryan Olenek hit his first home run of the season over the left field wall to inch Ole Miss closer.

Kessinger went 3-for-5, Olenek hit 1-for-3 with 3 RBIs while center fielder Will Golsan and Nick Fortes each went 1-for-4 with an RBI.

Ole Miss hit into three double plays that were back breakers in the fourth, eighth and ninth innings.

Being a Mississippi State alum ‘not at all’ deterrent…