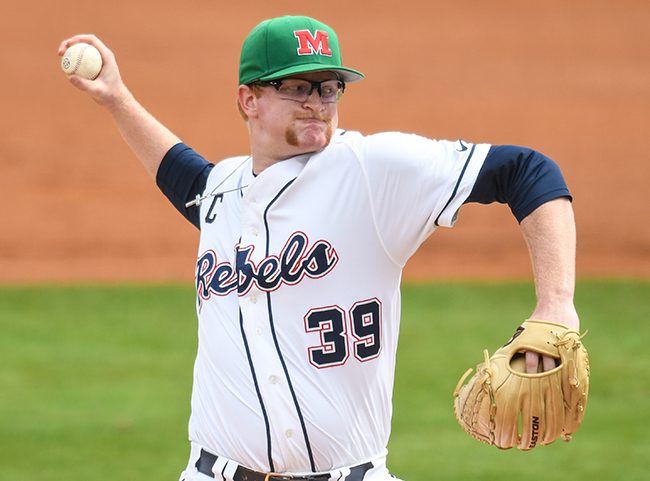 Ole Miss faced adversity on Friday night and the question was how they would respond. The answer was resounding with the No. 11 Rebels defeating Tennessee 7-1 to even the series on Saturday at Oxford-University Stadium.

Brady Feigl continues to have an outing better than his last as the junior remains undefeated on the season, notching his fifth win.

The bats came alive early and often for Ole Miss (18-2, 1-1 Southeastern Conference) and it was the Rebels turn to put Tennessee in the early hole with a 6-0 lead after four innings.

“As a coach, you’re always concerned and we’ve played so well that you want to know how you’re going to handle some adversity,” Ole Miss coach Mike Bianco said. “Everybody wants to win 10-0 every game but it’s not going to happen. (Friday night) wasn’t the result that we wanted but I think all of us wanted to see how they would respond today and they responded well.”

Feigl had command of all three of his pitches on Saturday. He gave up four hits but was able to limit the damage to only one run — a solo home run by right fielder Justin Ammons in the fifth inning — and keep Tennessee (13-7, 1-1) off balance at the plate. Feigl fanned nine batters and walked only one.

The biggest inning came in the sixth when Tennessee got the bases loaded with nobody out. Feigl induced a pop-up and a double play to keep the score 6-1 at the time.

“The biggest thing is the punch back,” Feigl said. “It’s swing day and that’s the way you get back in a series. Between the offense, defense and pitching today I think we did that very well.”

The offense came from the top and bottom of the order on Saturday for the Rebels. Leadoff hitter Grae Kessinger had another multi-hit game, going 3-for-4 with a run scored and two RBIs. Nine-hole hitter Second baseman Jacob Adams went 3-for-3 with three RBIs.

Designated hitter Tim Rowe also had a multi-hit game with a 2-for-3 day at the plate.

In the first two games of the weekend, the Rebels have scored 13 runs off 23 hits.

“I thought we were much better offensively today,” Bianco said. “For whatever reason, we wish we had the answer for that. …today we were more aggressive and you could just see it in the at-bats.”

The Rebels will look for their fifth straight series win to start the season on Sunday in the rubber match. James McArthur will take the mound with a first pitch moved up from the scheduled time of 1:30 to noon due to the threat of inclement weather.