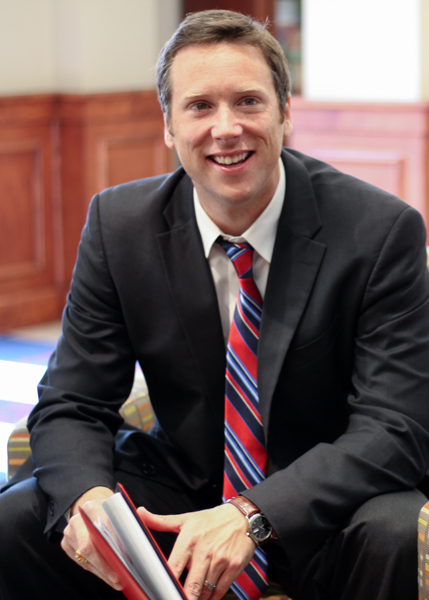 A graduate of the Mississippi Teacher Corps, Hunter Taylor is now a clinical assistant Professor and recruiter for the program and hopes to spread the message of the program to people across the county through his participation in the prestigious Presidential Leadership Scholars program.

Hunter is one of 59 people selected from across the country to be in the fourth class. He’s the only scholar chosen from Mississippi this year and the second person from Mississippi to be a part of the program since it started four years ago.

The Presidential Leadership Scholars program catalyzes a diverse network of leaders brought together to collaborate and make a difference in the world as they learn about leadership through the lens of the presidential experiences of George W. Bush, Bill Clinton, George H.W. Bush, and Lyndon B. Johnson.

Taylor, 34, earned his undergraduate degree at the University of Texas at Austin in 2005. He planned on attending law school in Texas; however, when his college roommate spoke about his own experiences teaching through the Teach for America program, and having been raised by two educators, Taylor decided to look into education as a career.

“I found the Mississippi Teachers Corps while Googling and thought it looked like a fantastic program,” he said. “I came to Ole Miss and visited, and then applied to the program and was accepted.”

He taught math in Jackson for two years while in the MS Teacher Corps. After his time ended in the two-year program, he returned to Texas to attend law school. While in law school, he took a job as assistant basketball coach at Trinity University.

“I soon realized the best part of my day was when I was on the basketball floor with the students,” Taylor said.

After one semester, he left law school and took a job as head basketball coach at Spring Hill High School where he also taught geometry. After two years, he took a job on the basketball staff at Baylor University, where he earned his doctorate in education. He eventually went to Arkansas State University where he coached basketball.

But when a job opened up at Ole Miss in the MS Teacher Corps program, he decided to return to the place where he discovered his love of teaching and help promote the program that allowed him to become a teacher.

In April 2017, Taylor and his wife, Brittany and their young son moved to Oxford to start a new chapter with the MS Teacher Corps, where Taylor teaches the participants in the program and helps to recruit new future teachers and works on retention.

“We want to keep these talented teachers in the state and our communities, and hopefully, in education,” he said.

Taylor decided to apply for the Presidential Leadership Scholars program after being encouraged by a friend in Texas who went through the program during its first year.

|I applied, thinking it was a long shot,” he said. “but I believed this would be a neat opportunity to get the word out about Mississippi Teacher Corps to influential people.”

After a lengthy application process, Taylor received an email in December informing him he was selected into the program.

Over the course of several months, Taylor and the other scholars will travel to each participating presidential center to learn from former presidents, key former administration officials, and leading academics. They will study and put into practice varying approaches to leadership, develop a network of peers, and exchange ideas with mentors and others who can help them make an impact in their communities.

The program kicked off in February.

“It’s a really diverse group of people from all walks of life and a variety of disciplines,” he said. “There’s physicians, CEOs, engineers, academics … Everyone comes with a different view.”

The participants all choose a project to work on during their leadership training.

“Mine is the Mississippi Teacher Corps, and how we can better serve the state,” he said.

Past scholar-led efforts include providing employment opportunity and mentorship to veterans, combating the opioid epidemic through doctor training and patient care, empowering women with economic opportunity through clean energy in Africa, and deploying much-needed resources in the wake of natural disasters.

“It is a great honor for the School of Education to have Dr. Taylor named as a  Presidential Leadership Scholar,” said Susan McClelland, UM chair of teacher education. “As a Scholar he will have the opportunity to develop essential leadership skills in the areas of vision, communication, decision making, influence and strategic partnerships. These skills are crucial skills for effective leaders in higher education. Through this prestigious program, Dr. Taylor will have a unique opportunity to learn from some of our nation’s greatest leaders.”

“Dr. Hunter Taylor was brought in to fill a new position we created for MTC which involves being an instructor, recruiter, observer, and developer of special projects,” said MTC Director Dr. Joe Sweeney. “The best thing about having him here is that he can focus on doing these things well. The biggest improvement has been in the area of recruiting, and thanks to his work we now have a stronger website and a much better social media presence. He is also an alumnus of the program, so he leverages his experience to mentor our participants. He is passionate about what he is doing and has strengthened our program, especially when it comes to building and promoting the MTC community.”