Changes made to Bramlett Elementary drop-off area on Jefferson Avenue 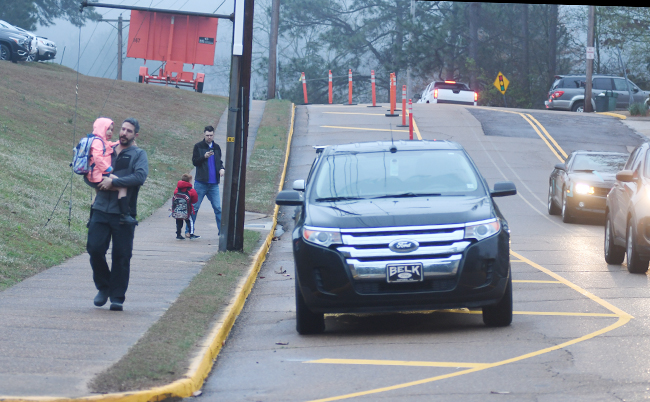 Parents who drop off their children at Bramlett Elementary via Jefferson Avenue may have noticed changes made to the road.

Improvements to ensure the safety of schoolchildren and their parents were made over spring break.

A new loading and unloading zone has been added on Jefferson Avenue immediately adjacent to the existing sidewalk on the side of the road closest to the school. Parents can park in the hashed area during the designated times and safely unload their children directly onto the sidewalk.

The change in the traffic patterns will allow all pedestrians to remain on the sidewalk and within designated crosswalks when exiting their car and walking to the school.

The travel lanes along Jefferson Avenue were also narrowed as a traffic-calming measure, according to the Oxford Public Works Department.

The changes were made in response to the increased number of parents and children crossing Jefferson in multiple locations, which was dangerous for both pedestrians and drivers.

“We strongly discourage parents from parking on the opposite side of Jefferson (as you would if you approached from the Square) and crossing with their children,” said City Assistant Engineer Reanna Mayoral. “The new striping plan allows for children to safely enter and exit the car on the sidewalk in front of the school.”

To access the drop-off area, parents need to approach Jefferson Avenue from Bramlett Boulevard and drive up the hill.

“We recognize that this will be inconvenient for parents until they are accustomed to the new route, but we believe the long-term benefits are worth the short-term aggravation,” Mayoral said.

Drivers are not allowed to make a U-turn on Jefferson Avenue to access the loading zone or to park in the opposite direction of oncoming traffic.

Striping changes were also made on Bramlett Boulevard to more clearly mark the turn lane available to drivers making left turns into the drive at the elementary school.

“Parents dropping off children in the car-rider line will notice a better-defined turn lane on Bramlett,” Mayoral said. “Traffic often backs up on Bramlett as cars try to make the left turn into the school. We hope the striping changes will allow more space for cars to queue while allowing through traffic to continue moving.”