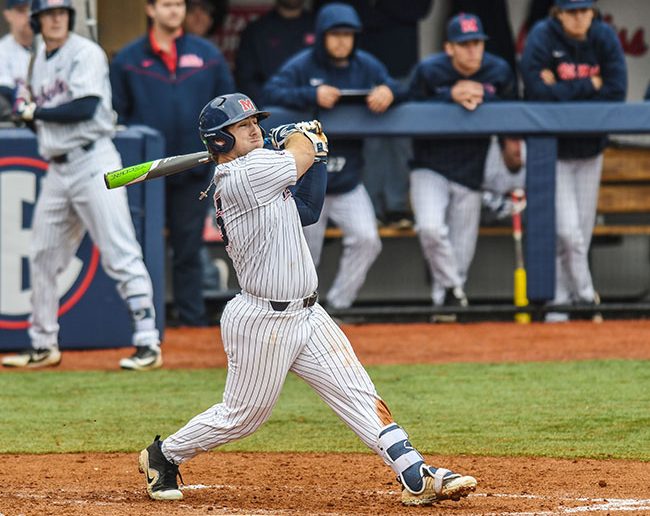 Thomas Dillard and Ole Miss gave the children plenty to cheer about Tuesday.

The fifth-ranked Rebels got more solid starting pitching and a big day from Dillard at the plate in a 9-4 win over New Orleans at Oxford-University Stadium. The Rebels became the first team in the country to reach 20 wins in their annual Kids Day game.

Dillard went 2-for-4 with his team-leading sixth home run and four RBIs. Will Golsan also had two hits and drove in a run in support of sophomore Houston Roth, who scattered five hits and allowed three runs while striking out seven in his fifth straight midweek start.

Roth (3-0) retired nine of the first 11 batters he faced before ending his day giving up two runs on two hits in the fifth, but Ole Miss (20-2) had an 8-3 lead at the time. Greer Holston and Connor Green combined for three innings of scoreless relief before Dallas Woolfolk gave up a solo homer but struck out three in the ninth.

“(Roth) is a battler, and that’s what makes him so good,” Ole Miss coach Mike Bianco said. “It was one of those tough days. … The fifth inning’s a shame because he’s one pitch away from it being statistically a really good day for him.”

News Orleans (9-12) outhit Ole Miss 9-6, but the Rebels created separation with the power of the switch-hitting Dillard, who did his damage from the right side, where he had just one hit in his first 20 at-bats this season. Dillard dug in against left-hander Christopher DeMayo in the third and sent DeMayo’s 1-1 offering the other way for a solo homer to right. Dillard just missed a grand slam off DeMayo in the fourth, launching a bases-clearing triple off the top of the wall in center to push the Rebels’ lead to 7-1.

“I always like hitting good balls to the opposite field,” Dillard said. “(Hitting) coach (Mike) Clem(ent) came up to me after the game earlier and said those are probably the two best balls he’s seen me hit right-handed. So it was a good day.

“Just getting into my legs a little bit more. Felt like I was coming out of it so just staying in my legs and trying to drive through the ball more.”

“It’s amazing because he can really hit right-handed well,” Bianco said. “Last year, it was the opposite. I think at the beginning of the year, he really got off to a good start right-handed. … He can do it from both sides, and obviously today you got to see that.”

Cooper Johnson, Carl Gindl and Anthony Servideo, who filled in for the injured Grae Kessinger (hamstring) at shortstop, also drove in a run apiece. Bianco said he’s not sure what Kessinger’s availability will be this weekend when the Rebels travel to College Station for a series against No. 12 Texas A&M starting Thursday at 6 p.m., but Kessinger will make the trip.

“We think he’s going to be OK, but we’ll determine that on Thursday,” Bianco said. “But he’s doing a lot better.”