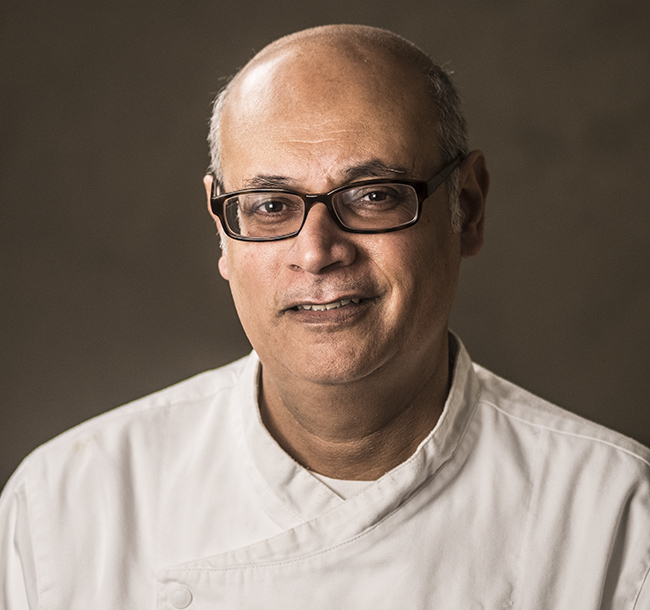 This is Bhatt’s fifth nomination in a row for the Best Chef South category, and he is in the running with chefs from New Orleans, Puerto Rico and Miami. Bhatt said the award is an honor, especially considering past and present nominees.

“You look at the list, all across the South, all across the country, and see the young talent and all the other folks who could easily be on this list, and it’s overwhelming,” Bhatt said. “It’s really flattering, and a great testament to the crew I have in the kitchen as well. They’re the ones who are doing all the work and making me look good, so it speaks volumes about the quality of folks we have working here.”

While some may think there’s an untold secret to success in the culinary world, Bhatt said that’s not the case. The only trick is being unapologetically true to oneself.

“Clearly we’re doing something right, to get some attention,” he said. “From the very first day that we started Snackbar, the idea was always to do our best. It’s not always perfect. There are times when people are not always happy with what we do, but we try to do our best and make corrections if we make a mistake.”

Bhatt said one of his greatest mentors and colleagues is the “Big Bad Chef” himself, John Currence. As the owner of City Grocery Restaurant Group, which includes City Grocery, Big Bad Breakfast and Snackbar, as well as a James Beard Award Winner, Bhatt said he’s thankful to call Currence a friend.

“He is one of the first people, always, to text or call. The reason I even get nominated or have the opportunity is because of John,” Bhatt said. “He’s the one who’s taken a chance, letting me loose. His support has been tremendous, without which I wouldn’t be in Oxford or on this list.”

Bhatt first started working with Currence at City Grocery, which is where he said he first became serious about cooking as a profession. After working his way through the ranks at the restaurant, Currence named Bhatt executive chef at Snackbar, which opened its doors in April 2009.

Currence and Bhatt have worked together in some capacity for about 25 years. Currence describes his friend as one of the most “wonderfully deliberate chefs” he’s ever worked with.

“Unlike other people in our industry, neither of us perform at work with that metal in mind every day,” Currence said. “It’s flattering and it’s wonderful, but it’s not Vish’s motivation. It’s one of those things where I know he’s truly surprised, he’s flattered and grateful.”

Maintaining Oxford’s place as a foodie destination is a task Bhatt doesn’t take sole credit for – it’s a community effort, he said.

“Folks like John (Currence) and John T. (Edge) put Oxford on the map. They’re the trailblazers who made this place a destination, first with City Grocery and then with Big Bad Breakfast and Bouré,” he said. “Now Oxford’s recognized even more with places like Saint Leo, and Corbin (Evans) is doing some great work at the Canteen as well.”

Next on the path to the James Beard Award is the awards gala, which will take place on Monday, May 7 at the Lyric Opera in Chicago.

The gala is the “biggest event” in the culinary world, according to Bhatt.

“There’s a lot of being in awe, because this is just a who’s who of the culinary world, a lot of people I’ve looked up to and followed over the years, a lot of great chefs,” he said. “This is the biggest gathering of talent across the country in one place, so to watch and be in awe and get to spend some time with folks that you’ve learned from, that you admire and folks you hope to learn more from, it’s really nice.”

Regardless of whether he wins or not, Bhatt said his mission remains the same – keep doing the best he can do. Recognition is the product of authenticity.

“The only advice I have for folks, if that’s what they’re asking, is to do your best and don’t worry about everyone else,” he said. “Don’t go looking for attention. If you’re doing what you’re supposed to do, then everything will fall into place like it’s supposed to.”