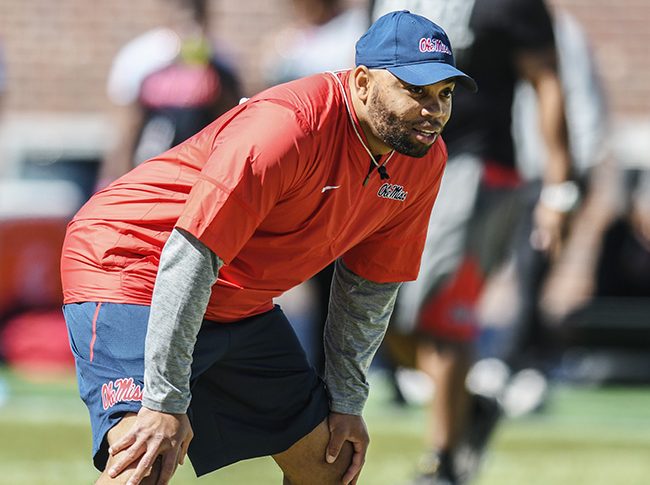 Charles Clark had opportunities to go elsewhere after the last college football season, but the call to return to his alma mater won out.

That call literally came on New Year’s Day from Ole Miss coach Matt Luke, who was looking to fill his 10th on-field assistant spot with some help in the secondary. Clark had spent the last handful of years out west with stints at San Jose State, Colorado and, most recently, Oregon after playing at Ole Miss, where he was a four-year letterwinner and three-year starter at safety for Ole Miss from 2003-06.

“I never really explored too many of those (other opportunities),” Clark said. “When Coach called me on New Year’s Day, I was actually down at the Rose Bowl watching the game. I looked at this opportunity and was grateful for it. Glad I had the opportunity and glad I’m back.”

Clark, one of two new assistants Luke added in the offseason (linebackers coach Jon Sumrall), spent last season as the cornerbacks coach at Oregon. Before that, Clark spent four seasons at Colorado, coaching safeties the first two seasons before taking over cornerbacks in 2015. He got his start in coaching at Duke before getting his first full-time assistant gig as San Jose State’s defensive backs coach from 2010-12.

“The biggest thing is to get back home not only to my personal family but my Ole Miss family and being able to give back to the guys sitting in the same seats I sat in and being able to help them with their experience like someone helped me once,” Clark said.

Clark is coaching Ole Miss’ cornerbacks. Jason Jones is responsible for the safeties, but Clark said the two are sharing coaching duties in a secondary that has plenty of experience and versatility. Clark will try help improve a defense that finished last season 59th nationally against the pass and had just eight interceptions, which ranked 10th in the SEC.

“We work together a lot just because of the communication and we’ve got players that play multiple spots and are able to fill in on both sides, whether it’s safety, corner or our Star position,” Clark said.

Zedrick Woods, a three-year starter at safety, and fifth-year senior Ken Webster are the veterans of a group that includes Myles Hartsfield, who started every game at corner as a sophomore after beginning his career at safety, and Jaylon Jones, who found a home at safety last season after spending his freshman year at corner. Webster, who could play corner or safety, adds to the versatility that Clark covets on the back end of the defense.

“I like that we have guys that are multiple. Now I can’t say he’s just a field corner or a free safety,” Clark said. “We’ve got (defensive backs) and we like to recruit DBs — guys that can play multiple positions because when somebody goes down, it’s not a depth-chart move. It’s just the next best guy up. I love that, and I coach it that way.”

Coaches are counting on cornerback D.D. Bowie, the highest-rated signee in the 2017 recruiting class, to take the next step in his development after playing in every game as a freshman. Senior Cam Ordway and junior college transfer Vernon Dasher are repping at Star (nickel corner) while Javien Hamilton, C.J. Moore, C.J. Miller and Montrell Custis have all played games in the secondary.

“I feel like we’ve got some talented guys for sure,” Clark said. “Guys that have played a lot of ball. … With those guys having a lot of experience, I’m able to play multiple guys and keep those guys fresh, especially going against the big-time receivers we go against each and every day.”

It’s a match Luke believes will benefit the Rebels in more ways than one.

“I think he relates well to the guys,” Luke said. “He’s a guy that played here and has a degree from here, so that’s always cool for the guys to know that, ‘Hey, this is a guy that wore the same jersey that I wore.’ He’s out there in his cleats coaching them up, running around and bringing some energy.”

• Ole Miss resumed practice Tuesday following a week off for spring break, working out for approximately two hours indoors in what Luke described as an energetic and physical practice.

• Luke has closely watched the linebackers and running backs. He said he saw “physical plays” from the linebackers Tuesday and singled out redshirt freshman Josh Clarke for a play he made near the end of practice while heaping praise on running backs Isaiah Woullard and Scottie Phillips, who broke a long touchdown run Tuesday.

• Tight end Octavious Cooley is getting most of the first-team reps with Dawson Knox out with an injury this spring and has taken advantage of the opportunity, Luke said. What’s helped Cooley, Luke added, is getting in “the best shape he’s been in since he’s been here” to help the 6-foot-3, 257-pounder with his stamina and consistency

• Former safety Armani Linton has dealt with a hamstring injury for most of the spring but has shown the coaching staff enough at running back to stay there for now, Luke said.