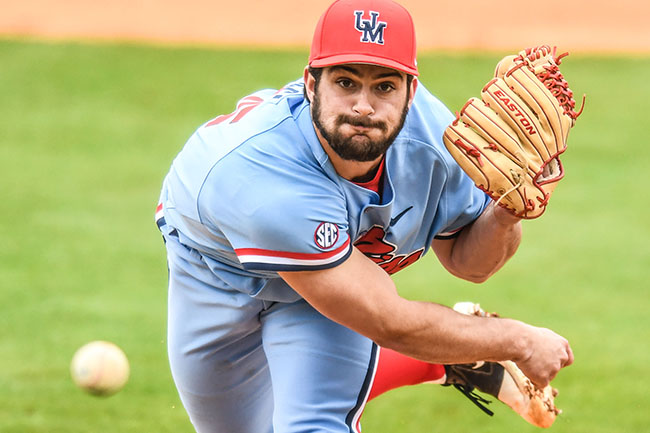 On a night when Ryan Rolison didn’t have his best stuff, Parker Caracci did.

It was just enough to help the fifth-ranked Rebels rally to land the first blow in their top-15 series against No. 12 Texas A&M with a 5-4 win Thursday at Blue Bell Park. Ole Miss will go for series win Friday at 6 p.m. in a game to be televised on the SEC Network.

Ole Miss (21-2, 3-1 SEC) trailed 4-2 heading to the eighth inning before exploding for three runs on four hits in the frame against reliever Nolan Hoffman. Thomas Dillard delivered the go-ahead single for the Rebels, who have won four straight.

Kessinger, in his first game back from a hamstring injury that caused him to miss two games, went 2-for-4 and scored two runs. Ryan Olenek and Nick Fortes also had two hits while Fortes finished with three RBIs.

A&M (18-5, 1-3) threatened in the home half of the eighth, loading the bases with one out against Caracci, but the hard-throwing right-hander hit another gear to preserve the lead. Caracci got back-to-back strikeouts of Braden Shewmake, who was 2-for-4 with an RBI double before that at-bat, and Logan Foster to thwart the threat. Rather than turn it over to closer Dallas Woolfolk in the ninth, Ole Miss coach Mike Bianco stuck with Caracci, who struck out the side with a fastball touching 96 miles per hour to notch his second save.

It continued a torrid start to the season for Caracci, who has racked up 31 strikeouts and walked just one in 14 ⅔ innings. Caracci and right-hander Will Ethridge (1-0) combined to limit A&M to four hits while fanning 11 over the final five innings.

Rolison allowed six hits, walked three and struck out three in his shortest outing of the season. The left-hander limited the Aggies to one run in a bases-loaded, no-out jam in the second before Fortes gave Ole Miss its first lead with a two-run homer in the third.

But the Aggies used a walk and two hits — the latter a two-out RBI single from Will Frizzell — to draw even in their next at-bat. Rolison worked a clean fourth but issued a leadoff walk to Michael Helman in the fifth before Shewmake followed with an RBI double to chase him after 96 pitches.

Ethridge came on and gave up a two-out RBI double to Aaron Walters before settling in for an otherwise dominant appearance, striking out six in three innings to keep Ole Miss close. But singles from Olenek, Cole Zabowski and Kessinger were the only other hits Ole Miss mustered through the first seven frames against A&M’s Stephen Kolek, who struck out 10 and walked just one.

But the Rebels went to work in the eighth against Hoffman (3-1), who had not allowed an earned run in his first 11 appearances. Three straight one-out singles, the last an RBI knock from Fortes, cut into the Aggies’ lead before Dillard followed with an opposite-field single that scored Olenek and Fortes after the ball got past left fielder Logan Foster to put Ole Miss ahead, setting the stage for Caracci’s overpowering six-out save.

What’s been the ‘best surprise’ for Ole Miss coach…