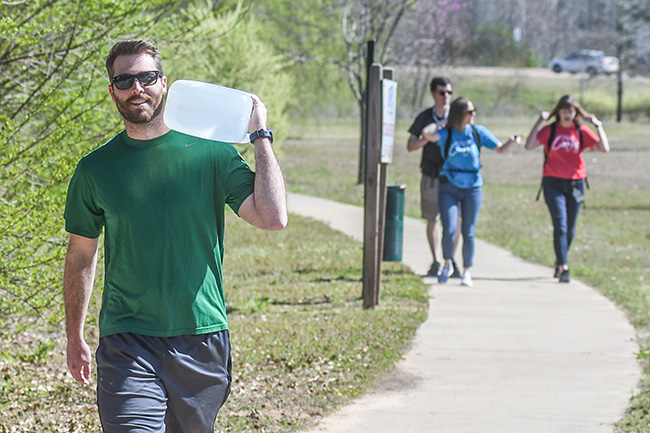 Russell Morton participates in a Clean Water Walk at Burney Branch Park in Oxford, Miss. on Thursday, March 22, 2018. Next Gear Solutions held their first Water Walk in an effort to construct two wells in remote villages in India.

Local company Next Gear Solutions held their first Water Walk on Thursday in an effort to construct two wells in remote villages in India.

The company, which specializes in restoration management software, partnered with the charity India Partners, which works to provide clean drinking water, stop human trafficking, provide job training and help children get an education. James Barker, a Next Gear Solutions employee who helped organize the event, said he was pleased with the response from coworkers, as well as friends and family.

“We met our goal of $16,000, so we’ll be digging two wells in two different villages in India, which will help thousands of people,” Barker said. “We’re doing this not only in Oxford, but in our midtown Atlanta office and our office in Lehi, Utah.”

The group spent the last month asking members of the community to sponsor laps by pledging a dollar amount of their choosing for every lap completed within an hour. Next Gear Solutions’ office is located on Office Park Drive, so the group gathered across the street at Bailey Branch Park.

While walking, each member of the 30-person group carried jugs with two and a half gallons of water, something Barker said is significant to the struggle many people face every day.

“They’re carrying the water, which symbolizes the walk these people, usually women, have to make every day just to get clean water,” he said.

Over 128 million people in India have no access to clean drinking water. What contaminated water they can get often contains harmful bacteria, which can lead to salmonella, hepatitis A, vibrio cholerae and E. coli.

After researching these statistics, Next Gear employee Scotty Dewey said she felt compelled to do her part.

The Water Walk is one of many ways the company does philanthropy work. Every month, Barker said, the employees participate in various service projects around the area.

Another Next Gear Solutions employee, Rex Harsin, has seen the effects of India Partners’ wells firsthand. After that experience, he suggested the idea for the Water Walk.

“The organization that we’re raising money for, I went to India with them two years ago. While I was there, we went to a village that had had water for awhile through these wells,” Harsin said. “Then we went to a village that did not have clean water, and then a village where they were dedicating their well. I actually got to be a part of turning on the water for the first time. It actually does change people’s lives.”

In the future, Barker said he’d like to see the Water Walk become a community wide event, with other local businesses joining in to sponsor participants and create their own teams. If one office could raise $16,000, he said, the entire community could raise so much more.

“Next year, we want to expand it, and get more of the community involved, more companies,” he said. “Maybe instead of only Next Gear contributing $16,000, the city of Oxford could contribute who knows how much.”