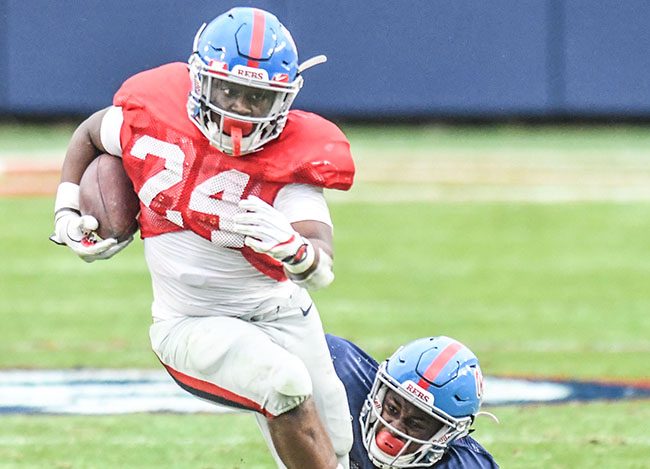 Ole Miss’ offense is ahead of the defense midway through spring drills.

That much was evident Saturday when the Rebels held a controlled scrimmage for about two hours inside Vaught-Hemingway Stadium. Quarterbacks Jordan Ta’amu and Matt Corral were efficient through the air while four running backs competing to replace 1,000-yard rusher Jordan Wilkins produced plenty of explosive plays on the ground.

“We had everything in for this (scrimmage), and we had higher expectations for our second group because they’ve had four or five more practices to clean some things up,” offensive coordinator Phil Longo said. “I think we’re throwing the ball a little bit better now. The timing is kind of there. We’re fighting the injury bug a little bit, but that gave some guys some opportunities to show what they can do.”

Ta’amu went 13 of 17 for 230 yards and two touchdowns while running for another score. Corral, who led the second-team offense, completed nine of his 16 passes for 116 yards and a score. A.J. Brown and Jason Pellerin each caught a touchdown while D.K. Metcalf beat cornerback D.D. Bowie to haul in a deep pass from Ta’amu, who’s going through his first spring as the starter after taking over the final five games of last season.

“Our chemistry is great,” Metcalf said. “I know we had some misses on a couple of balls thee, but we came to the sideline and just talked about it.”

Center Sean Rawlings and guard Alex Givens have been limited this spring as they nurse injuries. Fellow guard Jordan Sims slid over to center Saturday while redshirt freshman Ben Brown stepped in to rep with a first-team offensive line that didn’t have much trouble opening up holes for Eric Swinney, Scottie Phillips, Isaiah Woullard and converted safety Armani Linton, who combined for 226 rushing yards.

Swinney (12) and Woullard (11) got the most carries, each running for 70 yards and a score. One of Phillips’ nine carries went for a long touchdown through the middle of the defense while Linton finished with 48 yards on nine carries. Swinney, Woullard and Phillips all got first-team reps at some point.

“I thought with the ones, we got off the football and controlled the line of scrimmage. I think between Swinney, Isaiah Woullard and Scottie Phillips, we were downhill and physical,” Longo said. “I thought we ran with great pad level, and we had some explosive runs today. With the ones, I was pleased. The twos were a little more erratic. We had some good runs but some things we didn’t block up.”

The big plays drew the ire of defensive coordinator Wesley McGriff, who specifically lamented the physicality of a front seven that’s going through the spring without projected starting linemen Benito Jones and Qaadir Sheppard because of injuries. Safety Zedrick Woods also missed the scrimmage with “a hand that’s bothering him a little bit,” said McGriff, who added the injury isn’t serious.

The defense ended the day with a goal-line stand and also forced three turnovers, but consistency is still a work in progress for McGriff’s unit.

“We didn’t have that intensity we needed to until the second half of the scrimmage, and you can’t come out and spot anybody those kinds of points,” McGriff said. “The offense did a great job early on. They came out and brought it to us, and we didn’t answer the bell until late in the game.”

• Octavious Cooley, Pellerin and Gabe Angel split reps at tight end with Dawson Knox out with an injury this spring. Cooley stayed on the ground for an extended period of time after taking a hit late in the scrimmage but eventually walked off under his own power.

• Cornerback Myles Hartsfield did light workouts on the sideline but didn’t take part in the scrimmage. Bowie and senior Javien Hamilton were the first-team corners.

• Miami Dolphins offensive lineman and former Ole Miss All-American Laremy Tunsil as well as new men’s basketball coach Kermit Davis and assistants Win Case and Ronnie Hamilton were among those in attendance for the scrimmage.

Lafayette rallies but falls to Grenada in 2-5A showdown