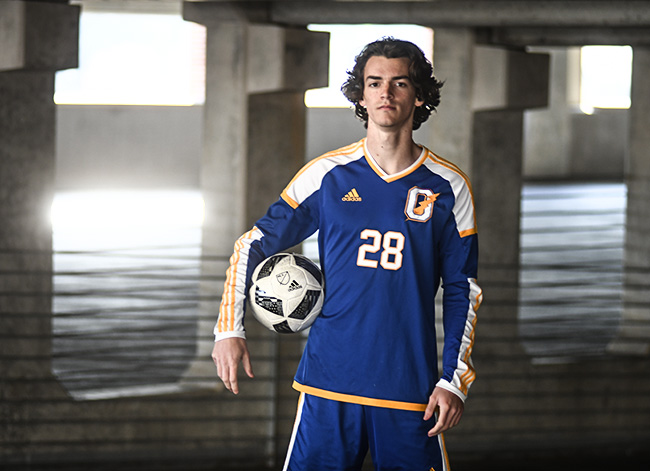 Throughout his career Keaton Calhoon has been one of Oxford’s key offensive threats but this year may have been his most important to the Chargers. The senior has always led the team in scoring, increasing his tally each season, but a record-setting season may have been his best and earned him the 2018 EAGLE Player of the Year.

“I was proud of myself but I have to give all my thanks to my teammates,” Calhoon said. “You can’t have stats with just one player. Every goal comes with an assist”

Calhoon scored 36 goals, setting a new school record for goals in a regular season, and was the only Charger in double figures. He knew he was having a special season statistically but it was not until more than midway through the year that Calhoon was informed of how historic it could be.

“My dad told me about halfway through the season,” Calhoon said. “He said, ‘just keep scoring goals.’”

Last season Calhoon scored 15 goals to lead the team but also had help with Neil Chandler and Preston Huggins scoring 13 and 12 goals, respectively. Chandler and Huggins graduated and took their production with them, leaving Calhoon left to try and replace it. At times it was an easy ask, but at other times it may have been too much for one person to shoulder.

“I definitely think there were a few games where some of the guys maybe relied on (Calhoon) too much than taking it to goal themselves,” Oxford coach Charles Sabatier said. “But as the season progressed other guys stepped up and starting scoring more goals.”

To be able to have the season he had, scoring nearly 20 more goals than last year, Calhoon improved his game in certain areas knowing he would be depended on more than usual in the Chargers’ first campaign in Class 6A and to help him when he plays at Mississippi College in the Fall.

“I guess the main this is making sure I’m asserting myself in the game,” Calhoon said. “One thing that I wanted to do at the beginning of the season, I knew I wanted to score at least one goal a game. I guess I just worked on making sure I was involved in just about every minute of the game.”

It was a strange season for Calhoon, who was not sharing a field with his brother Cole for the first time in his life. Cole graduated last season and is already down in Clinton playing at Mississippi College. The familiarity of knowing family was on the field was comforting to Keaton but this season it took some adapting.

“It was hard just because we’d played every game for the last 14-16 years,” Calhoon said. “We’ve got good chemistry together and a relationship that people who don’t have a brother on the field won’t understand.”

This will be only the first of two times the brothers will not share a field. The next will be Keaton’s senior season in Clinton in four years.

Behind Calhoon, Freeman was the next best threat for the Chargers with eight goals to go with his seven assists, tying Calhoon. Fulton was behind him with six goals and had two assists on the season.

Mayo was usually the one dishing out goals to Calhoon and others with a team-best 21 assists, 11 more than the next player on the team. Mayo also found the net himself with four goals.

Carwyle was a key threat defensively for Sabatier along with Fulton but there was so much versatility on the Chargers’ roster this season, defenders could turn into offensive players instantly.

“(Fulton and Carwyle) shutdown the outsides of our opponents attack and they also both made those overlapping runs,” Sabatier said. “This is why this season feels so disappointing because this team had so many weapons and so much potential. Both with versatility players on the field and coming off the bench.”

In goal O’Neill held his own, giving up 14 goals on the season for a 0.86 goals allowed average in 22 matches played.

There were three seniors who signed with colleges to continue their careers. Along with Calhoon, Fulton will also spend the next four years at Mississippi College while Carwyle signed with Northwest Community College.

Lafayette
It was another successful year for the Commodores but also a season where there were opportunities left on the table as they failed to make the playoffs their first season in Class 5A. Slim goal differentials with teams was all that kept them out of the postseason but it was strong play by several players that kept them in the running for a playoff berth up until the final regular season game.

Alex Fikes, Jaylon Jones, Thomas Jenkins, Jonathan Page, Mohamed Alryashi, Jose Lopez, Carlos Barahona and Alexander Diercks represent the Commodores on this season’s All-Area team.
Much like Calhoon was for Oxford, Fikes was the spearhead of the Lafayette offense. The junior scored 24 goals and was the only Commodore to score more than eight.

“(Fikes) is the most consistent scorer we have,” Lafayette coach Gene Anderson said. “One game he’s going to take on three guys and score and other games he tries to work people in. You just never know what you’re going to get out of him.”

Behind Fikes the scoring was equally shared with Barahona scoring eight goals, Lopez and Alryashi each with four goals and Jones with three.

Defense was the biggest question mark for Lafayette heading into the season. The question loomed larger after Anderson had to go from a four-fullback strategy down to three due to injuries. It was a task Jenkins and Page were up to.

“Jonathan and Thomas really picked it up and were very strong,” Anderson said. “The three backs kind of helped us on defense because you didn’t have to communicate.”

Diercks did his part allowing only 1.1 goals per match and the Commodore defense held opponents to 1.16 goals a match as a team.

“I think he’s just physically gotten better,” Anderson said. “Another year of experience in. Honestly, I think he could’ve had a better year than he did with three (full)backs. If we had cleaned up some of that early on stuff we may have only given up 15 goals in a season.”