Jordan Wilkins, out to prove he’s an ‘all-around’ back, impresses at Ole Miss’ Pro Day 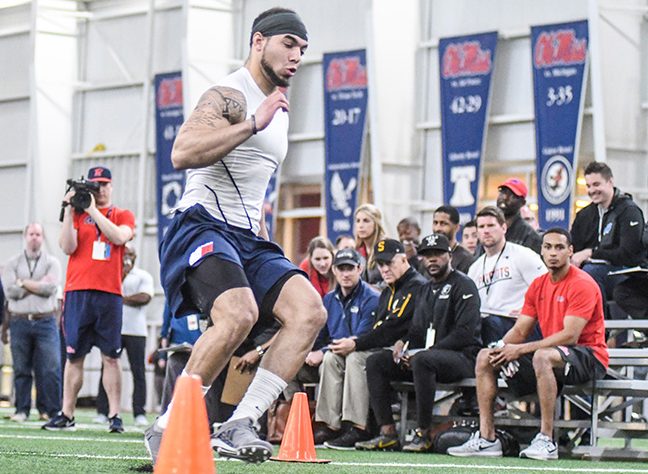 Jordan Wilkins referred to his time in the 40-yard dash as “decent.” But everything else went about as well as it could have for the former Ole Miss running back Tuesday.

Under the watchful eye of league personnel at the school’s Pro Day at the indoor practice facility, Wilkins put up the kind of numbers that should only improve his stock for this year’s NFL Draft. The 6-foot, 214-pounder turned in a 37-inch vertical jump and had a broad jump of 10 feet, 3 inches.

As for his 40, Wilkins ran it in 4.51 seconds unofficially. Wilkins said he was hoping to stay in the 4.4 range after a hamstring injury prevented him from running at the NFL scouting combine in Indianapolis last month, but more than anything, Wilkins was relieved to get the chance to perform with a clean bill of health.

“I felt great. Being healthy makes a huge difference,” Wilkins said. “I just wanted to come out, compete and have fun with it. I know the combine numbers weren’t where I wanted them to be. … I enjoyed it, and overall I thought I did pretty well.”

In his first and only season as Ole Miss’ starter, Wilkins averaged 6.5 yards per carry and scored nine touchdowns, becoming the school’s first 1,000-yard rusher since 2009. But it was the only season in which he had more than 72 carries in a career that included missing all of the 2016 season because of an academic credit snafu.

Now Wilkins said he’s out to show teams he can be more than a situational back. He’s projected to be taken in the mid-to-late rounds of the draft, which begins April 26, with NFL.com giving him a grade of 5.39, which the website classifies as a future backup or special teams contributor.

“I want to be more than just a third-down back, but whatever my role is, I’ll take it with a chip on my shoulder and try to excel in it,” he said.

Wilkins said his main focus is improving his pass protection, something he worked on during position drills Tuesday. He’ll continue to train in Oxford leading up to the draft as he continues to try to add versatility to his game for the next level.

“Do whatever the coaches want me to do whether that’s run routes out of the backfield, pass protection or run in between the tackles or outside,” Wilkins said. “I just want to be an all-around player.”

Marquis Haynes said he “felt slow” at the NFL combine last month. He rectified that Tuesday.

Haynes, who checked in at 6-2 and 234 pounds, ran an unofficial 4.56 40, improving his combine time (4.67) by more than a second. NFL.com projects the Rebels’ former rush specialist to be drafted as early as the third round. 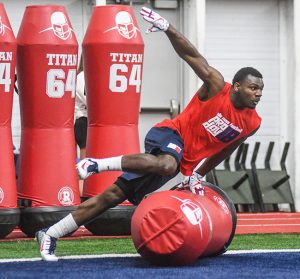 Exactly how soon Haynes comes off the board depends on how the team that selects him plans to use him. Haynes said he sees himself — as do most NFL teams — as an edge rusher in a 3-4 scheme, but he added there are some teams that “still don’t know what they want to do with me.” Largely playing end at Ole Miss, Haynes finished his career as the school’s modern-era leader in career sacks (32) and tackles for loss (47.5).

Haynes said he will continue training at JPISports Performance in Tuscaloosa, Alabama.

Breeland Speaks spent the majority of his time at Ole Miss at defensive tackle before moving to end the second half of last season, a move that turned the 6-3, 286-pounder into a force off the edge. He finished second on the team in tackles (67) and sacks (7).

Now NFL teams are trying to decide how they want to use Speaks, who said he felt like he had a “solid showing” Tuesday while only participating in position drills.

Speaks said most teams prefer him on the interior but mentioned the New Orleans Saints as one of a few teams that have shown interest in him as a strongside end. Speaks said he doesn’t have a preference and will focus his training over the next month on preparing to play either spot.

“I feel like playing ball for the last few years at (tackle), I’m pretty comfortable there,” Speaks said. “I feel like at end is kind of going back home, so it’s natural. It’s like 50-50.”