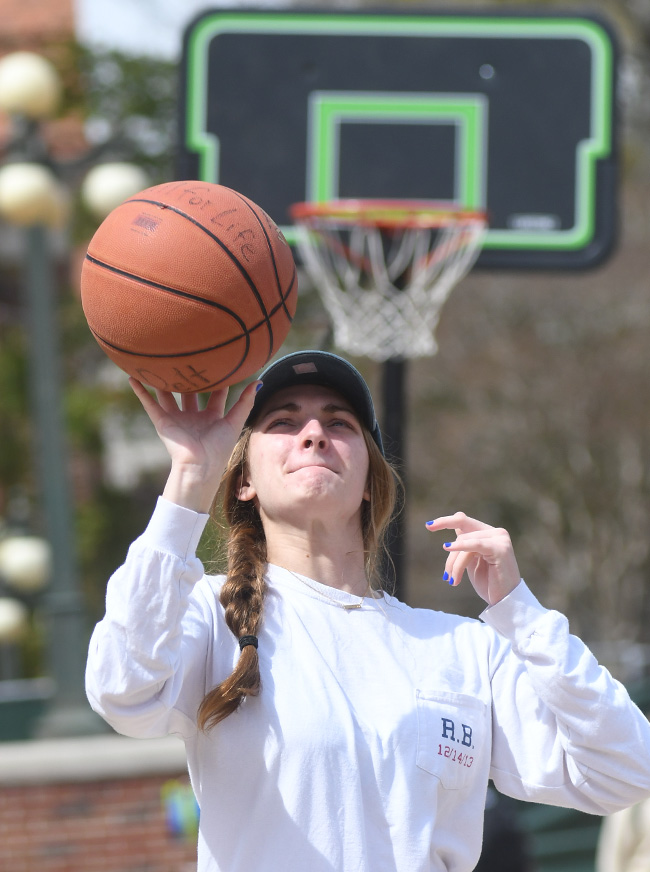 An Ole Miss legend, current Ole Miss athletes and students came together on Tuesday for a good cause.

The Phil Delta fraternity on campus, along with Active Minds, organized the Ball For Life: A Thousand Threes in Three Days event, which lasts three-days and carries a goal to reach 1,000 3-point shots to raise awareness for mental health.

Running through this afternoon, participants can pay $3 and spend one minute attempting as many shots as possible.

“We wanted to kind of keep the basketball aspect for our event and we wanted all our proceeds going to a cause that we felt would impact our chapter the most.” Phi Delt co-philanthropy chairman Cole Blue said. “We just think it’s a great way to raise money and awareness for a very serious topic that I feel like maybe isn’t talked about or discussed as much.”

The proceeds from Ball for Life will go towards the William Magee Center for Wellness Initiative. The center will bring a focus on drug and alcohol education and prevention and will be opened later this year or early 2019 as part of the South Campus Recreation Facility located on Chucky Mullins Drive.

University Sporting Goods, along with the city of Oxford, agreed to match one dollar to every shot made up to the desired goal of 1,000. The fraternity also held the event simultaneously at Oxford High School on Tuesday.

The event started on Monday and with the forecasted rain holding off, the fundraiser has gotten off to a successful shot with around 300 3-pointers having been made by midday on Tuesday.

“This is a topic that needs to be discussed more and there needs to be further education around it,” Carter said. “Anytime you can come out and do something like this is great. I think it’s a lighter way to come out and support, and with my history with basketball, I wanted to come out and get a few shots up, but certainly for a good cause.”

Current Ole Miss baseball closer Parker Caracci also stopped by to hit a few shots in honor of a fallen friend. Caracci’s good friend and former teammate at Jackson Prep Rivers McGraw took his life at the age of 20 in the Fall of 2016 after battling addiction throughout his life.

“I had two friends that committed suicide the past two years so (mental health awareness) definitely holds a special place in my heart,” Caracci said. “It’s a good cause to come out for.”