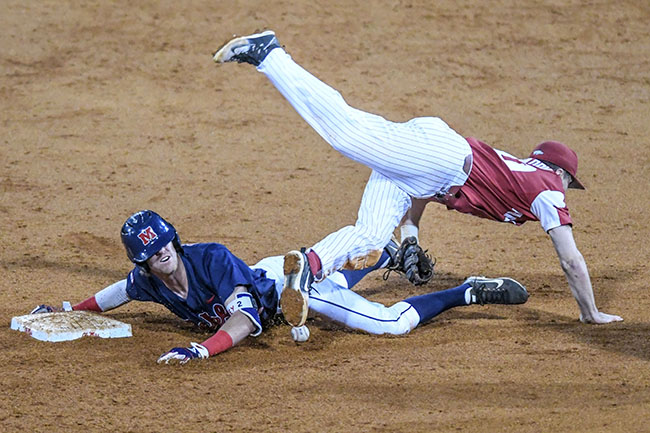 Ole Miss' Ryan Olenek (2) is safe at second with a double as the ball gets away from Arkansas second baseman Carson Shaddy (20) at Oxford-University Stadium in Oxford, Miss. on Thursday, March 29, 2018. (Bruce Newman, Oxford Eagle via AP)

Like it has so many times this season, Ole Miss punched back.

But Arkansas landed the final blow.

Jordan McFarland’s solo home run put the Razorbacks ahead for good in the middle innings as No. 5 Arkansas drew first blood in the teams’ Western Division showdown with a 6-4 win Thursday at Oxford-University Stadium. The teams will continue the top-5 series with a 6:30 p.m. first pitch Friday.

Having already rallied for 10 comeback victories this season, No. 4 Ole Miss (23-4, 4-3 SEC) erased an early 4-0 deficit and had the momentum after Cole Zabowski, who finished 2-for-3 with a home run and two RBIs, drew the Rebels even with an RBI single as part of Ole Miss’ three-run third. But Arkansas ace Blaine Knight and Matt Cronin combined to hold the Rebels scoreless over the final six frames.

Ole Miss brought the tying run to the plate in the seventh and ninth innings, but Cronin fanned Jacob Adams for his fifth strikeout to end the game as part of three one-hit innings of relief. Knight (5-0), who came in with a 1.83 earned run average, scattered seven hits, struck out seven and walked one over the first six innings, using double plays in the fourth and sixth frames to prevent any serious threat of Ole Miss taking the lead.

“I thought it was a gutsy performance by both (Ryan Rolison) and Knight,” Ole Miss coach Mike Bianco said. “You can see why Knight’s so good. Even though it looked like we were going to knock him out of the game, he’s still in there at the end.”

Arkansas (19-7, 5-2) outhit Ole Miss 14-8 with nine of those coming off Rolison, who fought his command early against a Razorback lineup with just two players hitting below .327 coming in while both starters had to deal with a stiff wind blowing out early on in a game that was delayed 19 minutes by rain.

Arkansas started the game with four straight singles and led 2-0 before the first inning was over. Nine-hole hitter Carson Shaddy, who also had a double as a part of a three-hit night, extended Arkansas’ lead with a two-run homer in the second before the rain came with one on and two out.

“It was a tough night to pitch, and I thought he hung in there,” Bianco said of Rolison. “They were good early. Four really good at-bats out of the gate, and he did what he was supposed to do. The beginning of the game, you’re supposed to attack the strike zone. … I think it was more of them and less Ryan tonight.”

Rolison (3-3) came back once play resumed and settled in to keep Ole Miss close, retiring 11 of the next 13 batters he faced. Zabowski got the Rebels on the board with a solo home run in the third before Ole Miss used an error, an RBI single from Ryan Olenek and Zabowski’s tying knock up the middle as part of a four-hit third to draw even.

Rolison was at 105 pitches through five innings, but Bianco wanted his sophomore left-hander to face the left-handed hitting Dominic Fletcher to start the sixth. Rolison got Fletcher to fly out on one pitch before McFarland stayed on Rolison’s 1-0 offering enough to drive it just over the right-field wall for the decisive blow. Casey Martin’s RBI single off right-hander Will Ethridge later in the inning provided the Razorbacks with some insurance, but Ole Miss mustered just three baserunners over its final four at-bats with none of them getting past first.

“When we got the quick out, we felt like we could go after McFarland,” Bianco said. “(Rolison) left a ball over the plate and he got it up in the wind. It’s just unfortunate.”