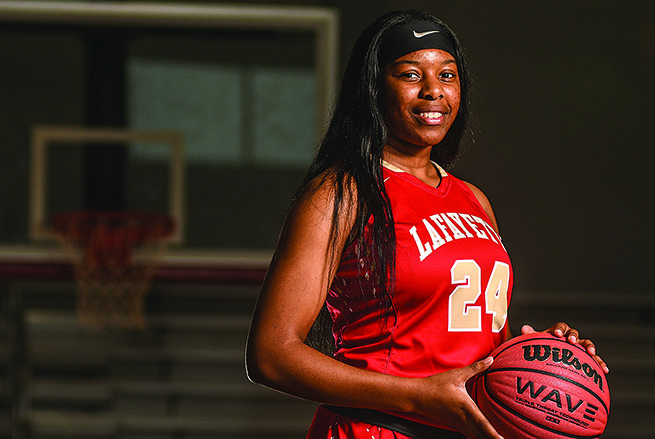 Last season Lafayette knew whom their offense was going through and who was going to be the floor general in Shaniyah Buford. This season Buford was not on the floor for the Commodores, instead she was playing for Itawamba Community College

That left an opening for one or several to fill the key void. Mariah Holland was one of those players. The junior had a much-improved season in the stat columns but also improved her overall game beyond the numbers. It helped her earn the honor of being the 2018 EAGLE Player of the Year.

“Mariah knows how to play one way,” Lafayette coach Shayne Linzy said. “Mariah goes out and she knows what her job is. She knows what her role is and I don’t think she tries to step outside of her role. So, she’s gotten really, really good at what she does.”

Holland worked on her offense, improving her shooting from mid-range. Last season she averaged 8.5 points a game, putting second on the team. This season she held in place at second-best but increased her scoring by nearly three points a game (11.4 ppg).

“Last year (Holland) shot the three-ball really well. She was under the basket really well,” Linzy said. “Now, she’s developed that 12 to 15-foot jump shot. That’s really paid off for her and it’s made her that much harder to guard.”

On top of her scoring improvement, Holland led the team in rebounds with 7.6 per game and pulled down 237 on the year. That is 1.6 rebounds better per game and 40 more rebounds than she pulled down her sophomore campaign.

Holland is not a vocal leader, much like many of Linzy’s players this season, but she still commands the respect of her teammates and opponents through how she conducts herself for 32 minutes on the basketball court.

“She’s not going to be out here yelling at folks, saying ‘let’s do this or let’s do that,’” Linzy said. “She’s going to go about her business and play basketball and she does that in all her sports.”

Lafayette
The Commodores are well represented on this years All-Area team. Joining Holland on the team is Azariah Buford, Xhiir Burgess and Kimaya Dixon. Four of Lafayette’s five starters helped the Lady ‘Dores make it back to Jackson, reaching the semifinals of the Class 5A state playoffs a year after winning the Class 4A state title.

“That’s what was so good about this team. I had a different leading scorer every night,” Linzy said.

Dixon led the team in scoring with 13 points per game. That number is up by over nine points from a season ago (4.8 ppg). Part of that has to do with not being needed on the floor as many minutes during her freshman season as compared to this year. Dixon also pulled down 5.6 rebounds a night which was good for third best behind Holland and Burgess and was also second-best on the team in assists with 2.4 a game.

“She played last year but she didn’t’ play the minutes of some of those other girls,” Linzy said. “She got playing time and played a lot and then kind of comes out of nowhere and leads us in scoring (this year). I pegged her as the leading scorer this year, anyway. She’s got a good shot. She can shoot the outside, she handle the ball so she can drive the lane. She’s got soft touch inside. Her doing what she did this year may surprise a lot of people but it really didn’t surprise me. I expected her to do this.”

With the loss of Orianna Shaw the rebounding production was going to need to be filled. That task fell on the shoulders of Holland and Burgess. Right behind Holland was Burgess’ 7.4 rebounds a game and she pulled down a total of 229 this year. Burgess was also third on the team in scoring with 10.7 points per game.

“(Burgess’) shooting has improved every year,” Linzy said. “She’s getting more confident shooting the ball. She even shot some threes this year. …’Boosie’, she rebounds the ball well. She defends really well and she can defend a post and a guard because of her athleticism. You add that and you tack that all on to her improved scoring and she becomes another one of those players who really is difficult to guard.”

A player who arguably had the most intense season was Lafayette’s Azariah Buford. The sophomore returned after helping lead the Commodores to a state title a year ago. This season did not come without obstacles. Early in the year Buford suffered another leg injury, which caused her to miss some time.

She bounced back and returned to form, scoring 10.4 points per game. Bufurd also made sure her teammates were involved with a team-best 4.1 assists per game and she pulled down 3.9 rebounds a night.

“She’s a tough kid,” Linzy said of Buford. “She’s been through a lot this year but she’s another one of those kids when the lights come on she steps on that court and knows she’s got people counting on her. She doesn’t want to let anyone down. …she does everything she can through pain whether it’s mental or physical to make sure they’re successful.”

Oxford
It was a forgettable first season in Class 6A for the Lady Chargers but there were bright spots throughout. Christina Owens was one of those bright spots.

The senior was an integral part of Oxford’s offense, averaging 9.4 points per game, 4.2 rebounds and 1.1 steals. She was scoring 12 points a night through the first eight games of the season but as teams began to game plan around her the scoring slowed down. A knee fracture midway through the year derailed Owens and she missed nine games.

“You want to send your seniors out with a great ending to their career and it didn’t happen the way we wanted but Christina was definitely one of those kids who did it the right way,” Oxford coach Cliff Ormon said. “A great kid (who) overcame a lot this year and wanted to be out there. I love her determination and that will to play.”