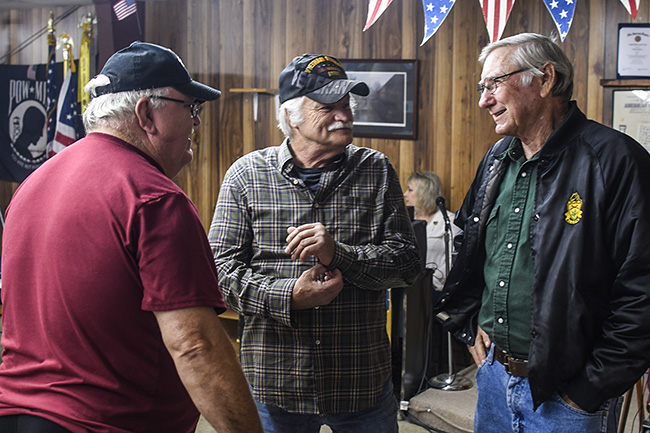 With a hot dog covered in mustard sitting in front of him, Vietnam veteran John Havas said he was happy to be among fellow veterans Thursday, a day officially set aside to honor former service members who served in Vietnam – even if it came 50 years later.

“It’s about time,” Havas said at the Vietnam Veteran’s Day celebration held at the Veterans Building in Oxford. “But I appreciate what our local (veteran) groups are doing for us today. This is a great thing.”

Local veterans Gene Hays and Jerry Bratton, with the support of the Disabled American Veterans and its auxiliary and the Marine Corps League, hosted the lunch for local Vietnam veterans where the public could visit and show their appreciation for them.

Havas, 86, served in the U.S. Navy for 20 years as a hospital corpsman; however, he served in Vietnam in 1966-67 with the Marine Corps as a medic and corpsman. He admits it wasn’t always an easy job.

“I took care of people’s ills and injuries,” he said modestly.

After he returned home to the states in 1967, Havas decided he would continue to wear his uniform proudly.

“We were not recognized very cordially when we came home,” he said. “I said, ‘To hell with it.’ I was going to wear my uniform and let the chips fall where they may. And fortunately, I didn’t have no trouble.”

Havas now lives in the Mississippi State Veterans Home. He said it was good to get out for the day Thursday, even if was just across the street.

“These guys have always been good to us over at the (State Veterans) home,” Havas said. “We’re a part of them. Most of us belong to one of the groups.”

Veterans, their families and community members were treated to hamburgers and hot dogs during Thursday’s event. Several veterans from the State Veterans Home were bused over and, as they entered the Veterans Building, they were recognized and given applause.

“We wanted to do something to honor all of our Vietnam veterans,” said Hays, who was instrumental in getting the day recognized in Mississippi.

“We’ve never had a ‘day,’” he said. “They didn’t like us much when we came back. But now it’s all out in the open, and it’s well deserved. It’s just a great day today.”