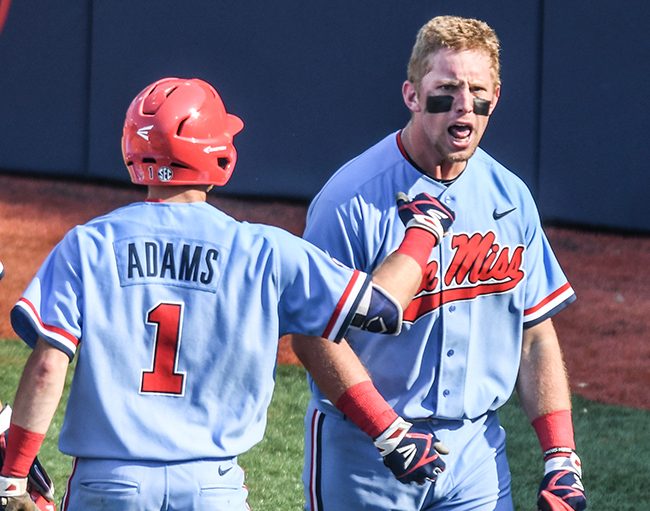 Ole Miss is quickly developing a certain trademark this season, one that showed up in spades Saturday.

The fourth-ranked Rebels went back and forth with No. 5 Arkansas before holding off the Razorbacks’ final surge to claim the series finale with an 11-10 victory at Oxford University Stadium. The win, which put Ole Miss atop the SEC Western Division standings pending the outcome of other games around the league, clinched a series for the Rebels in which each game was decided by two runs or less.

“If you ask us from a coaching staff standpoint what we’re most proud of, it’s the toughness they’ve shown,” Ole Miss assistant Mike Clement said. “Just never out of the fight. Even in the four losses we’ve had, we’ve had the winning run at the plate or the tying run at the plate in every single one of those games. We’ve just shown toughness from the mound, defensively and offensively as well.”

With both teams doing most of their damage against the bullpens — the teams combined to use 10 pitchers — Ole Miss erased an early 1-0 deficit with a run in the fourth before exploding for four in the fifth and three in the sixth for an 8-2 lead. The runs came in bunches as the teams combined for 19 of them over the final four innings, including a three-run home run from Eric Cole off Will Stokes in the eighth that cut Ole Miss’ lead to one.

“It was nerve-wracking,” said Ole Miss outfielder Ryan Olenek, who capped a 7-for-12 weekend with two hits and two RBIs. “It was a nailbiter the whole time. It was just almost like when’s it going to stop?”

Cole’s shot was one of four homers for Arkansas (19-9, 5-4 SEC), which came into the weekend second nationally in that category. Seven of the Razorbacks’ 12 hits went for extra bases with Cole, cleanup hitter Heston Kjerstad (3-for-5, two RBIs) and catcher Grant Koch (1-for-3, three RBIs) combining for eight RBIs.

Cole Zabowski went 2-for-4 with a solo home run in the fifth that gave Ole Miss (25-4, 6-3) its first lead while eight-hole hitter Tyler Keenan had three hits. His most timely one came on a three-run, opposite-field homer in the bottom of the seventh that pushed Ole Miss’ lead to 11-6 after Arkansas had gotten with two with a four-spot a half inning earlier.

“We knew how well we could hit, so that wasn’t really a surprise to us,” Olenek said. “We’ve always been pretty confident.”

Arkansas’ rally forced Ole Miss to go back to Parker Caracci, who came on for Stokes a day after recording a six-out save in the Rebels’ 5-4 win Friday and retired both batters he faced in the eighth before coming back out for the ninth. Luke Bonfield led off with a double to put the tying run in scoring position, but even with a fastball that didn’t reach its usual velocity in the mid-to-upper 90s, Caracci got a popup, a strikeout and a flyout for his fifth save in the last seven games, finishing off the Rebels’ 11th come-from-behind victory in front of an overflowing crowd of 11,146 — the fifth-largest in school history — that saw the Ole Miss win its first series over a top-5 opponent in more than two years (No. 2 Louisville in February 2016).

“They’re definitely one of the best teams we’ve faced offensively,” Caracci said. “If you leave it over the plate, then they’ll most likely make you pay for it.

“I was a little tight coming in to the day, but I loosened up on the field. I was fine.”

Ole Miss’ James McArthur and Arkansas left-hander Kacey Murphy dueled early with the teams trading sac flies for the game’s only runs through the first four and a half innings. McArthur (4-0) bounced back from his shortest outing of the season last weekend at Texas A&M (1 ⅓ innings) by pitching into the seventh, allowing three runs on just four hits while striking out two.

Murphy (3-2) yielded five hits and struck out four, retiring seven straight at one point during his 4 ⅓ innings of work. But Zabowski’s go-ahead homer was the first of three straight hits to start the fifth for the Rebels, igniting an offensive onslaught on both sides that Ole Miss managed to survive.

“Toughness, if I had to name one word,” Olenek said. “We’re a really good team and really hard to beat.”

Ole Miss will head to Memphis on Tuesday for a rematch with the Tigers, whom the Rebels beat 8-6 in Oxford on Feb. 20. First pitch is slated for 6:30 p.m.

Oxford, Lafayette have strong showings at the Mississippi HS…