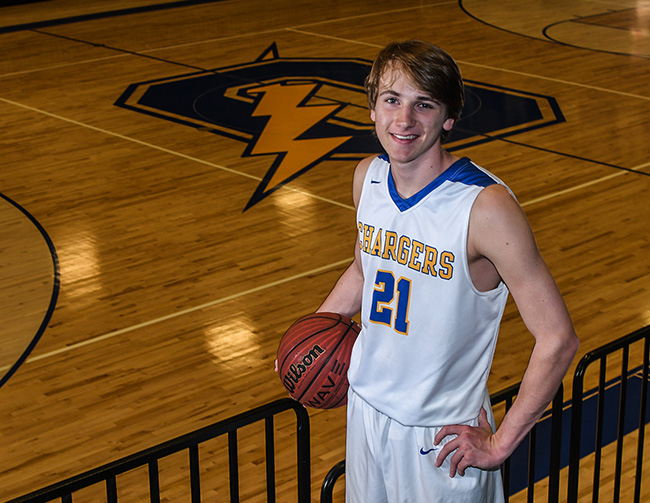 Tucker Scott was looking for consistency in his shooting. The music lover found a rhythm in his shot that worked and Scott became one of Oxford’s reliable scorers this season and it caused him to be named the 2018 EAGLE Player of the Year.

Throughout his high school career Scott was always a role player, which was all he ever had to be with the talents of Jarkel Joiner, Terry Williams and others on the court with him. This season the Chargers experienced life with out any of those players on the floor and the void that was left in the offensive production was going to have to come from somewhere.

“I found myself to be especially working hard over the summer to be a perimeter shooter,” Scott said. “I believe that is what coach has used me as over the season. I just worked really hard to succeed in that position. …I found that rhythm as soon as I could and I let it play throughout the whole season.”

Scott became one of those players, averaging 15.6 points per game and turning into a deadly weapon behind the arc. The senior shot 39 percent from three-point range and hit 74 three-pointers this season. Scott also pulled down 3.2 rebounds per game, 3.1 assists and 1.1 blocks. He played in all 27 games this year.

The offseason between his junior and senior years Scott made the decision he wanted to be a leader and raise the level of his play. He got into the gym as often as he could and ‘living right next door’ to the gym was an advantage.

“The three-pointer has always kind of been in my game I’ve just never been able to perform sufficiently in the game,” Scott said. “Once I realized I was a senior, I was a leader on the court, then I had to step up and start knocking down these threes when it mattered.”

It did not take long for Scott to realize he had his shot figured out and the three-pointer was going to be a consistent weapon in his arsenal. The very first game of the season it clicked and Scott was on his way to one of his better seasons as a Charger.

The responsibility to be a leader and reliable on the court was magnified when fellow senior Drew Bianco injured his wrist and missed the final couple weeks of the season.

“He became a verbal leader and did so much for us,” Oxford coach Drew Tyler said. “He was the guy that we could count on night-in-night-out being there for us. …Once that confidence level went up things just started falling in place. He was definitely our firepower on offense for us this year.”

The basketball career may be over for Scott who plans to hang up the sneakers and attend Belmont University in Nashville to major in music business this fall.

Before succumbing to the wrist injury that nagged him most of the season, Bianco was Oxford’s workhorse under the basket. The senior was the Chargers’ leading scorer with 17.9 points per game and he pulled down 6.1 rebounds a night and had two assists per game.

Bianco returned to basketball in his junior season, making the All-Area team both times and was the sparkplug for Oxford when energy was needed.

“(Bianco) became an offensive player and then he got in such good conditioning he was almost able to average a double-double with rebounds,” Tyler said. “He put the time in. He cares. He signs his name to his performance and once again, that’s contagious”

When region play began that is when Pegues turned up his play on the court. The sophomore scored 16.1 points per game to go with 4.1 rebounds and 1.1 assists.

It has been an adjustment for the standout football player to transition into a basketball player, but two years into his high school career it is starting to take shape.

“I think once we got into region play J.J. Pegues was viewed as, ‘this is a basketball, football player,’” Tyler said. “He’s an athlete. …I think he could play a level of college basketball. We know he can play a certain level of college football. His best days are ahead on the basketball court. He put it in fourth and fifth gear more consistently throughout the entire game.”

Lafayette
The Commodores first season in Class 5A did not go how they would have liked, but it was still successful thanks in part to the play of Jonah Matlock and Keilan Buford.

The ‘Dores duo accounted for a nearly 23 points per game with Buford averaging 12.4 points a night and Matlock averaged just over double figures with 10.2 per game.

“We felt like the strength of our team coming out of the summer was going to be our guard play,” Lafayette coach John Sherman said. “We were very young in the post so we needed that good backcourt play. (Buford and Matlock) were pretty consistent with it. When one of them wasn’t scoring it seemed like the other one kind of picked it up. We wanted the ball in one of their hands and they were pretty much reliable the whole season.”