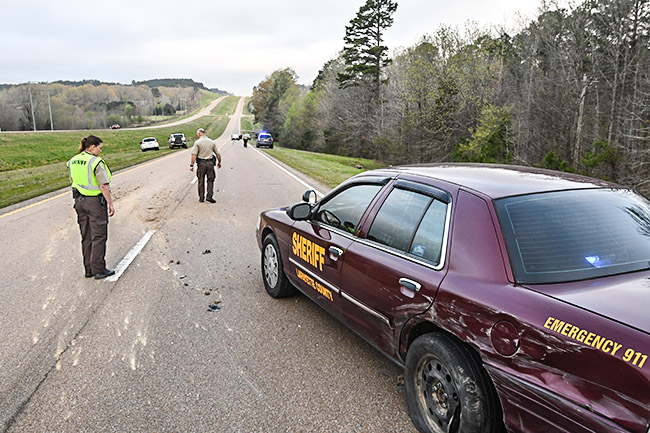 Deputies look over the area where fellow deputy Justin Wilson was struck by a vehicle while working a wreck scene on Highway 6 near the Denmark exit east of Oxford, Miss. on Monday, April 2, 2018. Wilson was transported to Baptist Memorial Hospital-North Mississippi in Oxford where he was in stable/good condition this morning.

A Lafayette County deputy was injured Monday morning when he was hit by a vehicle in the westbound lanes of Highway 6 East in the Denmark area.

According to the Lafayette County Sheriff’s Department, Deputy Justin Wilson responded at about 6 a.m. to assist Mississippi Highway Patrol troopers with a wreck involving a truck that hit a horse on the highway.

While on the scene, another vehicle traveling west on the highway did not move over to the left lane to avoid law enforcement and struck a marked patrol car and then hit Wilson, who was directing traffic away from the wreck scene.

The first vehicle hit and killed the horse that was standing in the highway. Another car wrecked trying to avoid hitting the horse. No information on those drivers or possible injuries has been made available by MHP as of Tuesday morning.

Wilson was transported to Baptist Memorial Hospital-North Mississippi where he was treated and released with multiple bruises and a broken wrist.

LCSD Chief Investigator Alan Wilburn said Monday the driver who hit Wilson has not been charged.

“We are investigating this as an accident,” he said this afternoon.

MHP Capt. Joseph Miller said more information will be released once the report is finalized.