Health the priority for Ole Miss heading into Grove Bowl 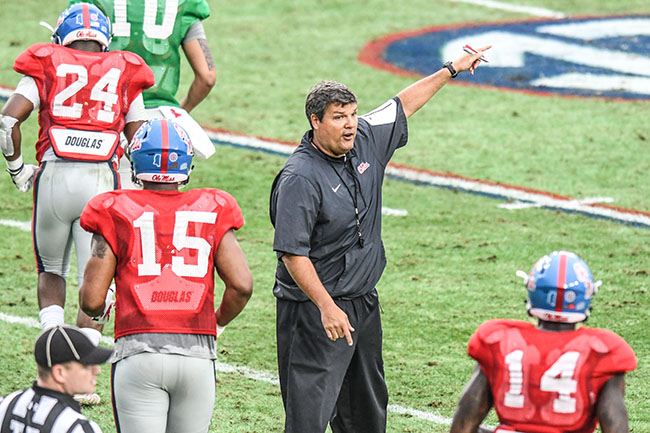 Matt Luke fielded the question then chuckled a bit before answering.

“I like it for the fans because they enjoy it and they want to see the team,” Ole Miss’ coach said when asked if he’s a fan of spring games. “I think it’s good for the fans.”

Luke then followed with the concern that many coaches share this time of year ahead of their game, an annual spring capper that’s shifted over the years to more of a controlled scrimmage with teams trying to avoid significant injuries five months before they play a game that counts. For an Ole Miss team already nursing a laundry list of injuries, staying healthy will be the overriding objective when this year’s Grove Bowl starts at 1 p.m. Saturday (ESPNU) at Vaught-Hemingway Stadium.

Luke said a running clock will be used with the rest of the format for Saturday’s scrimmage breaking down like this: offense versus defense — ones against ones and twos against twos — with the offense trying to catch up to the defense, which will be spotted 27 points. Luke said he’s hoping to go about 80 plays.

Offensive lineman Alex Givens, defensive tackle Benito Jones and defensive end Qaadir Sheppard — all projected starters who have either missed all of spring or been limited — won’t play. Receiver A.J. Brown (knee), cornerbacks D.D. Bowie (hamstring) and Javien Hamilton (hamstring) and center Sean Rawlings (back) are doubtful, though Luke said he’ll wait until after Thursday’s practice to make a final determination on their statuses.

Luke said the scrimmage will be one last chance for the younger players who have been filling in to make an impression this spring as the Rebels try to build depth heading into the fall, particularly along the offensive and defensive lines.

“You really want to make sure those young guys get reps. I’m really looking at Royce Newman, Ben Brown, Ross Donelly, the young linebackers,” Luke said. “You really want to see those guys take a step forward in their fits because as those guys get better, our team gets better. As those people that are hurt start coming back, those guys have gotten more reps. Even though it’s tough right now, they end up getting a lot of reps that end up helping you down the road.”

Luke added he expects all the injured players to return for the start of training camp in August.

Quarterback Alex Faniel was taking reps at tight end during Tuesday’s practice, a move made largely because of the progress made by freshman Matt Corral, the highest-rated signee in Ole Miss’ 2018 recruiting class.

“We really wanted to get Matt a lot of reps. He looked like he was progressing pretty good, so we wanted to make sure,” Luke said. “We didn’t want Alex to be standing around wanting to see if we could get him involved. He’s a big, good athlete, so we just wanted to make sure we got some guys on the field.”

Faniel redshirted last season after signing with the Rebels as a consensus three-star prospect. Luke said the Rebels have only been repping incumbent Jordan Ta’amu and Corral at quarterback this spring, though Jason Pellerin took some snaps in goal-line and short-yardage packages during a scrimmage Friday that was closed to the media.

Luke wasn’t ready to commit to the move being a permanent one for the 6-foot-6, 248-pounder, but Faniel will stay there at least for the rest of the spring.

“He made a couple plays (Tuesday),” Luke said. “That’s the good thing about quarterbacks is they know all the routes. They’re able to get in there and make some plays.”