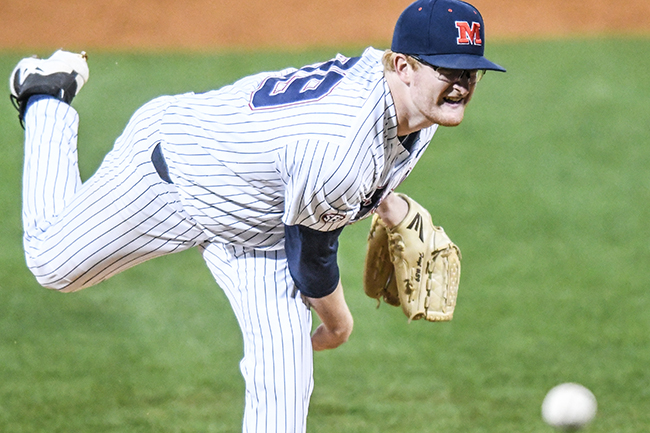 It’s not so much that Ryan Rolison has pitched poorly. It’s that Mike Bianco wants to go with the hot hand.

That’s the way Ole Miss’ coach explained his decision to shuffle the Rebels’ rotation this weekend. Right-hander Brady Feigl (6-1, 2.23 earned run average), who’s been the Saturday starter all season, will get the ball in Friday’s series opener at Mississippi State while left-hander Ryan Rolison (3-3, 3.63) will move back a day and start Saturday.

The Rebels (25-4, 6-3 SEC) are coming off a series win over then-No. 5 Arkansas that ended Saturday, putting Ole Miss in sole possession of first place in the Western Division three weeks into SEC play.

“Brady’s throwing it so well,” Bianco said. “And really Ryan hasn’t pitched bad but maybe just not as dominant as Brady’s been through the seven starts. I thought this was the right time to do it, especially with the way the week fell, to give him normal rest.”

Rolison, widely regarded as the Rebels’ top prospect for this summer’s Major League Baseball First-Year Player Draft, has racked up 54 strikeouts in 39 2/3 innings this season, but SEC teams have had more success against the southpaw when they’ve put the ball in play. Teams are hitting .250 this season against Rolison, who’s allowed 10 earned runs on 21 hits with seven walks in 16 innings over his first three league starts.

Rolison’s shortest outing of the season came two weeks ago at Texas A&M (three earned runs on six hits in four innings) before Arkansas got to him for five runs on nine hits in 5 1/3 innings, including a pair of home runs, in Ole Miss’ 6-4 loss Thursday.

Bianco said he hasn’t seen mechanical flaws or any other inconsistency that he can pinpoint for Rolison’s recent struggles.

“In most of his outings, it’s just been an inning or two,” Bianco said. “To be honest with you, a lot of it has just been good fortunate — or bad fortune, however you want to say it. Not taking anything away from Arkansas, but a couple of home runs that maybe usually aren’t home runs on this field. … But Ryan has given us great efforts, and the thing I’m probably most proud of is the way he’s handled it.”

Feigl has been the Rebels’ most consistent starter, beginning the season with five straight quality starts on his way to NCBWA National Pitcher of the Month honors for February. Feigl pitched into the seventh inning in each of his first two SEC starts and went 5 1/3 his last time out against Arkansas, working around four walks to limit one of the nation’s more explosive offenses to two runs on seven singles.

“The rotation is what it is this week, and the same with the lineup,” Bianco said. “Ryan understands and Brady understands, and at the end of the day … we’ve got three Friday-night guys that throw on the weekend. We’re just trying to win baseball games, and we put the guy there that’s pitched the best.”