Oxford rallies to defeat defending 6A champ Tupelo, stay atop Region 2-6A 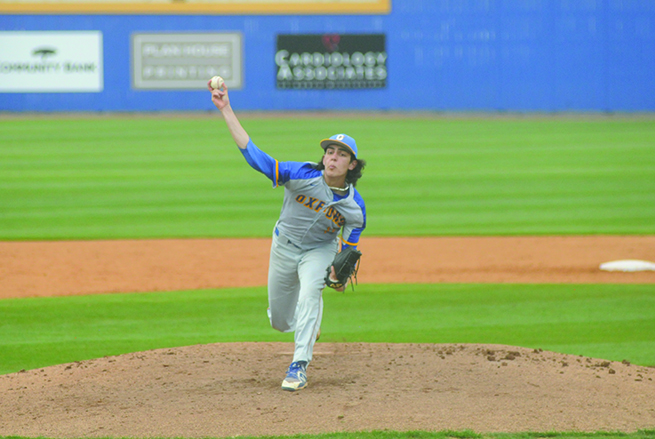 TUPELO — When a bad game happens Oxford coach Chris Baughman has a hard time getting over them, especially by the next morning. Luckily for him his team does not have much trouble with putting the previous game in the trash before the sun comes up.

After blowing a three-run lead and losing to South Panola 4-3 on Monday night, the Chargers put themselves back in the driver’s seat for another region championship 24 hours later. Oxford defeated Tupelo 4-1 in a key Region 2-6A match up at Golden Wave Field on the campus of Tupelo Middle School.

“This bunch, I could say a lot about them but the one thing that they’re going to do is they’re going to forget a bad night quicker than I’ll ever forget it,” Baughman said. “I’m proud of them. I told them before the game, ‘don’t make this game bigger than what it is. It’s a division game between two really, really good teams.’ I thought we played pretty loose tonight.”

For the first six innings it was a pitcher’s duel between Oxford’s Parker Stinnett and Tupelo ace Hunter Elliott. Stinnett worked a complete game, giving up one run off three hits while walking three and striking out 10 Tupelo batters. His one bad inning came in the third when Tupelo cashed in a leadoff double by second baseman Peyton Puckett for first and only run of the game.

“(Stinnett) was unbelievable,” Baughman said. “Parker pitched out of two jams and the rest of the night he was pretty flawless.”

Elliott, an Ole Miss commit, worked 5 2/3 innings and kept his season ERA at zero while giving up three hits and striking out five batters. Oxford could not take advantage of a shaky start by Elliott, who walked two batters and hit three others in the first two innings. The Chargers stranded four men on bases the first two frames.

After two quick outs in the sixth, John Luke Marlin replaced Elliott after a two-out double by Stinnett. Marlin gave up the tying run after an error by Puckett and then allowed three more in the top of the seventh when Oxford broke the game open.

Center fielder Clark Stovall went 1-for-4 with an RBI and a run scored while left fielder CJ Terrell recorded the other Charger RBI with a 1-for-3 night at the plate. It was a scary moment for Terrell late in the game when a pitch ricocheted off his batting helmet and hit him in the face. Terrell stayed in the game and delivered an RBI-single in the seventh to provide some cushion for the Chargers.

The two teams will meet up again in Oxford on Thursday for the second of their scheduled three games this season. The game was originally scheduled for Friday but the forecast of more inclement weather caused the game to be moved up. It will be the third division game for Oxford in four days.

“We’ve played a bunch of games in a quick span of time this year. We’ll be OK,” Baughman said.

Health the priority for Ole Miss heading into Grove…