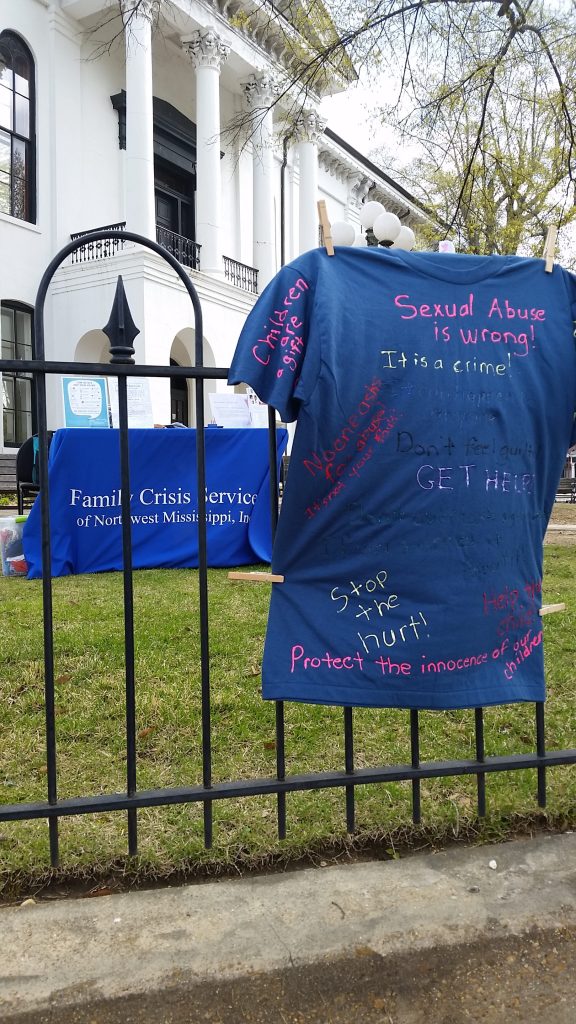 Clothesline Project T-shirts were on display at the Lafayette County Courthouse lawn Tuesday in recognition of Sexual Assault Awareness Month.

Assuming that only 20 to 30 percent of rape cases are reported, there’s the potential that there could have been up to 200 actual cases of sexual assault committed last year in Lafayette County, according to Libby Lytle, advocate for Family Crisis Services of Northwest Mississippi.

On Tuesday, the Oxford Board of Aldermen read and adopted a resolution proclaiming April as Sexual Awareness Month, recognizing the efforts of Family Crisis Services that will be participating in several events over the coming weeks to bring awareness and help lower the number of sexual assaults in Oxford, Lafayette County and on the University of Mississippi campus.

This year’s theme is “Embrace Your Voice.”

“It builds the idea that we are stronger together and that new partners and community members are needed to expand sexual assault prevention efforts,” Lytle said. “We can all help the next generation foster attitudes that promote healthy relationships, equality and respect.”

“We all have a role to play in preventing sexual violence in our community,” Lytle said. “Our actions, big and small, have a ripple effect on those we teach, guide and influence. From modeling healthy behavior to addressing inappropriate conduct, everyone can make a difference.”

On Tuesday, Family Crisis Services had a table with resources set up on the Lafayette County Courthouse lawn, along with T-shirts on display that are made by sexual assault survivors.

On Saturday, the table will be on display from 9 p.m. to midnight in front of Visit Oxford.

On April 18, Family Crises Services will be on hand to participate in the Ole Miss Rebels Against Sexual Assault’s Take Back the Night event at 5:30 p.m. where there will be a march and candlelight vigil.

A sexual assault forum will be held at 5:30 p.m. on April 23 at the Oxford Police Department training building.