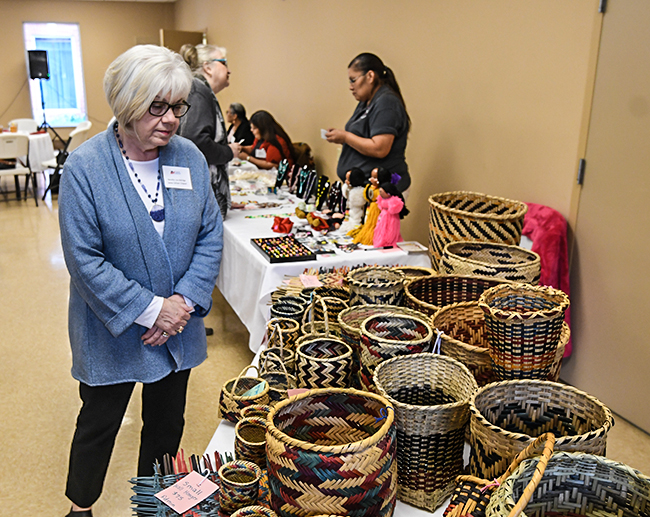 A little milk and flour and thousands of years of tradition are all that goes into Rosemary Williams’ traditional Native American fry bread, which was quite the hit at Thursday’s Daughters of the American Revolution luncheon honoring the Mississippi Choctaw Indians.

“And a little ‘rosemary’ of course,” she said jokingly as she turned the fry bread over in the pan.

Williams, along with other members of the Mississippi Band of Choctaw Indians, attended the luncheon held at St. Andrew’s United Methodist Church to share some of their talents and art with the DAR. Traditional clothing, dolls and beadwork where on display during the lunch, presented by Lorene Alex, Trudy Jimmie and Phyllis McMillian, members of the MBCI who live in Philadelphia.

The Choctaw Color Guard led by Sammy Wilson opened the lunch meeting for the David Reese Chapter of the DAR of Oxford.

While dining on Williams’ fry bread and a catered lunch by My Michelle’s Catering, those attending the annual guest luncheon watched a video showing traditional dances of the Choctaw. Larson’s CashSaver donated the milk and flour for the fry bread.

After, Amanda Bell, tribal archivist, presented the “Native Mississippians: Choctaw History and Culture” slideshow that told the history of the Choctaw from 8,000 BC through modern times, including when the Choctaw were removed from their lands in Mississippi to Oklahoma from  1831 to 1833. However, about 5,000 Choctaw remained in Mississippi, and their descendants are now part of the MBCI.

“Many of our Mississippi DAR chapters have Chickasaw and Choctaw names,” she said.

Every state DAR has a Chairman of American Indians since the organization supports several Native American schools.