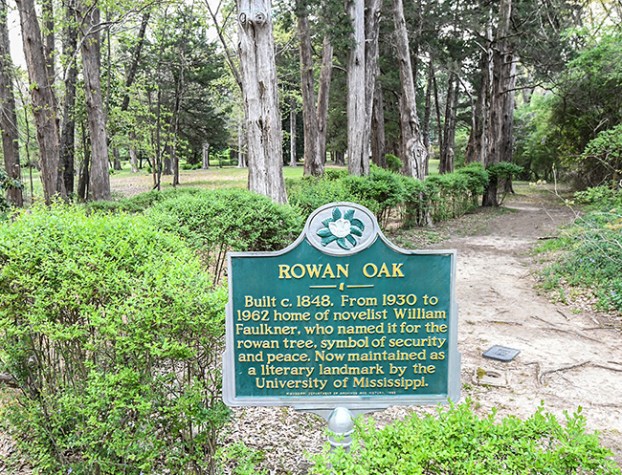 A sign about Rowan Oak is located outside the former house of the late Nobel Prize winning author William Faulkner, in Oxford, Miss. on Thursday, April 5, 2018. (Bruce Newman, Oxford Eagle via AP)

Mississippi is well-known for its literary heritage, and thanks to a $30,000 grant from the National Endowment for the Humanities, the state will be commemorating its authors with the Mississippi Writer’s Trail.

The Writer’s Trail is a project of the Mississippi Humanities Council, the Mississippi Arts Commission and Visit Mississippi. It will feature historical markers at significant sites that will tell the stories of writers such as Margaret Walker Alexander, William Faulkner, Eudora Welty, Tennessee Williams, Richard Wright and many more.

Mississippi is well-known for its literary heritage, and thanks to a $30,000 grant from the National Endowment for the Humanities, the state will be commemorating its authors with the Mississippi Writer’s Trail.

The Writer’s Trail is a project of the Mississippi Humanities Council, the Mississippi Arts Commission and Visit Mississippi. It will feature historical markers at significant sites that will tell the stories of writers such as Margaret Walker Alexander, William Faulkner, Eudora Welty, Tennessee Williams, Richard Wright and many more.

Recently, NEH announced a special grant opportunity for state history and heritage projects that commemorate the 150th and 200th anniversaries of statehood, and Mississippi is the first recipient.

Dr. Stuart Rockoff, Director of the Mississippi Humanities Council, said collaboration between state organizations shows how far-reaching the project will be.

“One of the great things about Mississippi is that our cultural agencies have a long tradition of collaboration,” Rockoff said. “The diversity of the partners reflects the diverse goals of the project – we hope to spur heritage tourism, as Visit Mississippi has done with the Blues Trail and the Freedom Trail, as well as raise awareness of people living in Mississippi about the great writers that we have produced.”

The goal of the statehood grants is to establish or enhance humanities-based exhibitions, public programs and education initiatives to accompany – and add historical context to – state celebrations of entry into the Union.

It will also serve as a reminder of the various backgrounds and accomplishments of famous Mississippi writers, and an inspiration to those who hope to follow in their footsteps.

“Mississippi storytellers have defined the nation by illuminating a place. You cannot know them, or their works, fully, without understanding where these creative geniuses have come from,” said NEH’s Senior Deputy Chairman, Jon Peede. “For younger artists, those that are coming up, I think to see individuals from their same communities, from their same town and learn about what they’ve achieved is naturally inspirational.”

Similar trails, such as the Blues Trail, Country Music Trail and Freedom Trail, have also been an inspiration since their beginnings, according to Malcolm White, former director of Visit Mississippi and current executive director of the Mississippi Arts Commission. White has helped develop trails across the state since the 1980s, when Ray Mabus was governor of Mississippi.

The idea that Mississippi should embrace its culture is nothing new, White said, and neither is the idea that embracing culture can be a marketing tool. However, he said the Writer’s Trail lies in the natural path of progression.

“One of Mississippi’s greatest assets is our cultural story and literary contribution to America,” White said. “We have a huge responsibility to tell this story correctly, involve as many people as possible, so that there’s an agreed-upon language.”

Involvement is one of the key components of making the trail happen. In addition to MAC, Visit Mississippi and MHC, the Community Foundation for Mississippi, Mississippi Humanities Council, Mississippi Book Festival, Mississippi Development Authority, Mississippi Department of Archives and History and the Mississippi Library Commission are all working to make the project come to life.

The group is assembling a team of scholars, for example, to research and determine which writers should be on the trail, and which stories should be told on the individual markers. The first set of markers will be unveiled at the Mississippi Book Festival in Jackson this August. To say it’s a collaborative effort between the states is to put it simply, White said.

According to Craig Ray, director of Visit Mississippi, the trail will draw in more tourists to the state, but more importantly, will encourage these tourists to invest more in communities once they’re there.

“There’s a portfolio of options for tourists – gaming, golfing, music, cuisine, group travel and conventions, as well as our heritage and culture tourism, civil rights tourism and the study and celebrations of our own artists here in the state,” Ray said. “We feel like this is another way to celebrate and offer to our travelers a great way to travel the state and go to these locations, of homes or libraries and places to celebrate the lives of these famous authors and writers.”

The first markers will be unveiled in Jackson this August, with more than 20 planned for other sites around the state, including Oxford, in the next couple of years.

Members of the Lafayette County Board of Supervisors and other elected officials gathered on County Road 406 yesterday for a... read more